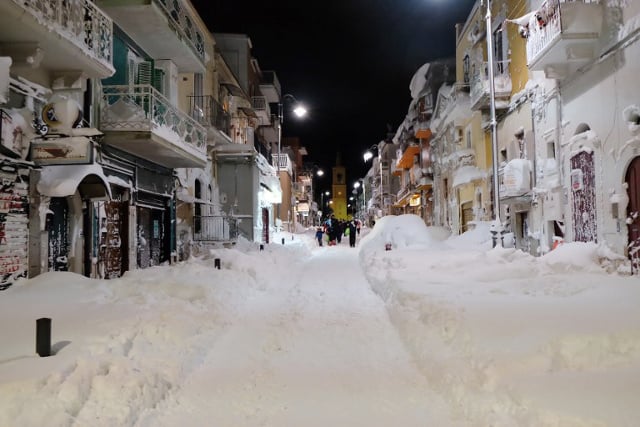 Over the coming week, the forecasters at Meteo Italia predict continued snowfall in the centre and south – even at low altitudes – with more stable weather in the northern regions.

On the whole, temperatures will see a very slight increase, but mornings are predicted to be frosty. Italy's Civil Protection Department has issued another weather alert relating the strong winds and heavy seas in the country's coastal areas as well as the cold.

The areas hardest hit are the central regions of Abruzzo and Molise, and the south of the country has also had a snowy start to 2017, particularly Apulia, Basilicata and north-eastern Sicily.

Even the beaches in Salento, Sicily were covered with snow, while other southern towns including Tarantino, Lecce and Bari also woke up to a blanket of the white stuff.

Multiple road closures and blocks to heavy vehicles are in place in the affected areas, while rail transport and flights have also been affected.

Many schools will be closed on Monday and Tuesday in the centre-south, and in Lecce and Chieti, local elections have been postponed until January 15th as the mayors have urged residents to avoid unnecessary travel.

Consumer organization Coldiretti warned that the cold snap would likely cost the country “millions” of euros in damage, and said that the situation in the towns affected by 2016's earthquakes was especially “dramatic”.

In towns such as Amatrice and Norcia, thousands of residents are still living in temporary accommodation and the animals of the region's many farms are in damaged or unstable buildings.

“These regions are used to dealing with snow,” said the head of Italy's Civil Protection Agency, Fabrizio Curcio, “but the earthquake has made everything a bit more complicated. Due to low temperatures and strong winds, some rebuilding operations have had to be suspended.”

While the middle of this week is expected to see an easing of temperatures, Meteo warned that “between January 13th and 14th, a new disturbance is expected, with cold air arriving from the west”. However, the impact is not expected to be as dramatic as the conditions experienced over the long weekend.

The country's fire service carried out over 1,500 interventions between Saturday and Sunday, as smaller towns suffered electrical outages and some people found themselves snowed in.

Were you caught up in Italy's snow this weekend? Send your photos and experiences to [email protected]