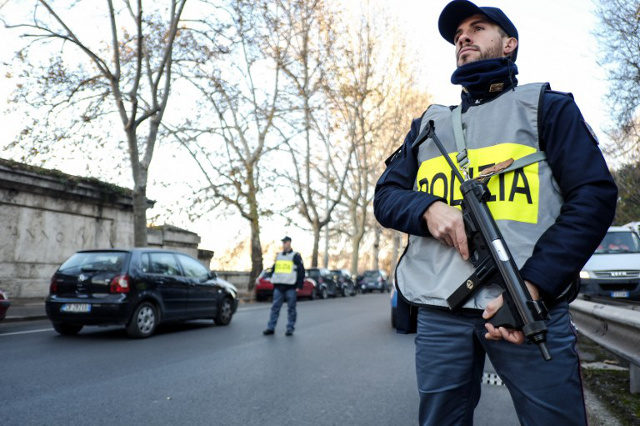 Tunisian national Saber Hmidi, 34, was formally arrested in connection with new charges while serving a three year, eight months sentence for possession of an illegal weapon and assaulting a police officer.

Police confirmed that the Tunisian is suspected of belonging to Libyan organization. Ansar Al-The group has links to Al Qaeda and police said in a press conference on Tuesday that it supports and fights with Isis.

Tuesday's anti-terror operation, targeting individuals thought to belong to terrorist organizations based on investigations which began in 2014, took place across the region of Lazio, which contains the capital Rome.

“His goal was to send fellow prisoners into conflict theatres once they were released,” said Augusto Zaccariello of the Italian rison police.

Wiretaps of Hmidi's phone conversations also suggested he planned to travel to Syria after his release, but that he was not plotting any terrorist attacks in Italy, the officer told a press conference.

The police video below shows some of the items seized in the raids, including a black flag and knives, displayed at an 11am press conference in Rome.

Police said that the man arrived in Italy in 2008 and was granted permission to stay after marrying an Italian woman, with whom he had a child. He lived in Ciampino, on the outskirts of Rome, did not work and had already spent time in prison in Italy for crimes unrelated to terrorism, including robberies and drug dealing.

“This operation demonstrates how prison can be a place of spreading terrorist ideologies,” said one of the officers.

Another officer added that the investigation confirmed that networks of extremists in Italy are “increasingly fragmented, less connected; micro-groups or single individuals”, which makes them “more dangerous” as it can be harder to track down those involved.

The other individuals targeted had links to the arrested man, police said, explaining there had been five further raids, but that the operation had been concluded and no further arrests were expected.

The arrest was made two weeks after it emerged that Berlin Christmas market attacker Anis Amri may have been radicalized in a Sicilian jail.

Amri spent four years in jail in Italy for arson, before travelling to Germany. After allegedly carrying out the attack on a market, he fled to Italy, where he was fatally shot by police on December 23rd.

Only a handful of Italian residents are known to have joined jihadist groups in the Middle East and the country is not seen as having a significant problem with homegrown Islamist militancy.

But Amri's case has focused attention on the possibility that some of Italy's prisons could be breeding grounds for jihadism.

The two were living in London, England but were legally resident in Rome, Ansa reported, and had been illegally intercepting emails and phonecalls.