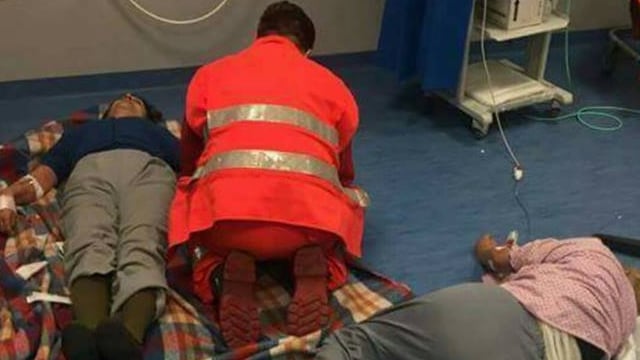 One of the pictures which has provoked outrage. Photo: Facebook

The photos were widely shared on Facebook, leading the health unit of Italy's police force, Nas, to carry out an urgent inspection of the Santa Maria La Pieta hospital in Nola on Monday.

Two patients were shown lying on the floor, one on a thin blanket, in the image, which was accompanied with the comment: “This is how patients are treated at the Nola hospital…”

On Monday evening, Italian media reported that the hospital's director, Vincenzo de Stefano, along with two heads of the emergency department, had been suspended.

De Stefano had defended the hospital on Monday, telling Italian media: “We preferred to treat people on the ground rather than give them no help at all.”

“In the hospital we have 107 beds and 15 stretchers, ten of which are for emergency treatment, and on Saturday two were given to ambulances to deal with an emergency,” the hospital chief said said, according to La Stampa.

He said that one patient shown in the pictures was suffering cardiac arrest, and that without any stretchers or beds available, “the doctors chose to carry out defibrillation on the ground in order to save her life – which they were able to do.”

According to De Stefano, the other person pictured had been placed in the recovery position because they were vomitting, in order to avoid suffocation.

He admitted that the photos did not give a “good impression” of the hospital, but said that the treatment was the only solution during an “exceptional” situation.

The bishop of Nola, who has been in the post for 17 years, also defended the doctors, saying the “institutions” were at fault.

“The health system doesn't see the enormous difficulty the Nola hospital is in, which has limited means to treat around 500,000 citizens,” said bishop Beniamino Depalma.

Over the weekend, extreme weather conditions saw a surge in hospital admissions across the centre-south in the country. In Nola, 265 people sought treatment at the hospital between Saturday and Sunday, compared to an average of 150.

Three investigations have been opened into the hospital: by the Campania region, the Ministry of Health and the public prosecutors in Nola.