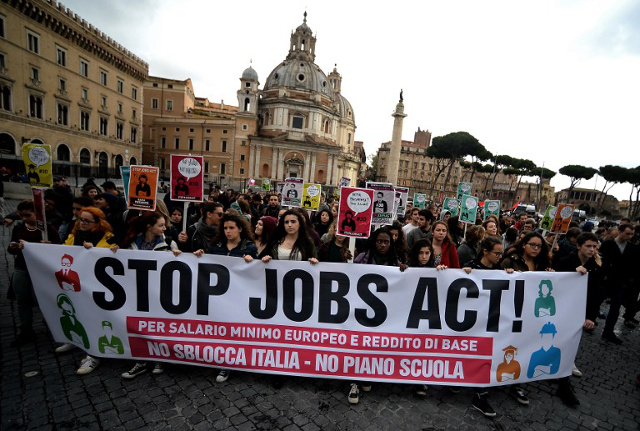 Protests against the labour law before it was first adopted in 2014. Photo: Filippo Monteforte/AFP

The ruling, which had been keenly-awaited because of its broader political consequences, was a significant setback for the country's labour movement.

But it was greeted with relief by the ruling Democratic Party as it prepares for an election due by early next year, and was seen by observers as a boost to Renzi's hopes of a comeback.

The court rejected a trade union-sponsored petition calling for a vote to repeal the key provision of a law known as the Jobs Act, which made it easier for companies to hire and fire employees.

Made up of a package of reforms adopted in 2014-15, the Jobs Act was seen as the most significant measure adopted during Renzi's nearly three years in office.

The centre-left leader quit in December after suffering a crushing defeat in a referendum on unrelated constitutional reforms aimed at streamlining Italy's parliamentary system.

The court upheld the unions request for referendums on two other elements of Renzi's labour market reforms – a voucher system that enables small employers to pay workers and payroll taxes in one go, and new rules on public sector tenders.

But as reviews of both these elements are already under way, the votes may prove unnecessary and, even if they do go ahead, the stakes will be much lower.

Had the court accepted the petition for a referendum on the centrepiece of the Jobs Act, which was signed by 3.3 million people, the vote would have taken place between April and June.

Political observers had said that could have prompted the current centre-left government to go to the polls as early as March to avoid the risk of having to fight an election in the aftermath of another referendum setback.

Wednesday's decision was widely seen as a gift to Renzi on what was his 42nd birthday.

The former mayor of Florence wants to lead the Democratic Party into the election but that would have been politically impossible if a reform he had championed had been rejected by voters.

Renzi and his allies say the Jobs Act has introduced long overdue flexibility into the Italian labour market.

They claim it is already fostering job creation and will, over time, attract investors currently put off by the high costs and bureaucracy involved in trimming labour forces.

Its critics say the act has diluted workers' rights with no sign of it generating new jobs.

Susanna Camusso, Secretary General of the CGIL union grouping which organized the petition, said her organization would consider a further challenge to the Jobs Act through the European Court of Justice, without specifying the basis for such a move.

“We remain convinced that the interests of the workers we represent are best served by them having security of employment,” Camusso said.

Lorenzo Guerini, a deputy leader of the Democratic Party, welcomed the court's decision “with respect and great satisfaction.”

He added: “This will allow us to pursue the reform of the labour market in a way that improves workers' conditions and makes them more efficient.”

Renzi was replaced in December as premier by close ally Paolo Gentiloni, who is not seen as a potential rival for the leadership of their party.

Gentiloni, 62, was recovering in hospital on Wednesday after undergoing emergency angioplasty surgery to repair a blocked artery.