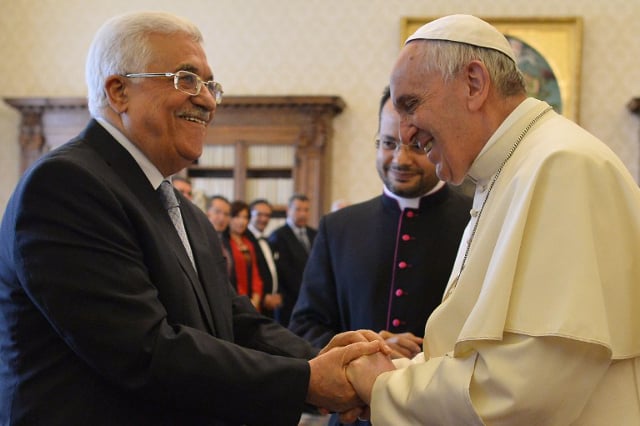 Francis and Abbas during a previous visit. Photo: Alberto Pizzoli/AFP

It will be the third time Francis has met Abbas following an encounter during the pontiff's 2014 trip to the Holy Land and the Palestinian leader's 2015 visit to the Vatican to attend a canonization ceremony for two Palestinian nuns.

Relations between the Holy See and Palestine were upgraded in 2015 with the signing of an accord expected to lead to the establishment of a Palestinian embassy in the Vatican at some point this year.

Israel was angered by the accord, which came two years after the Vatican recognized Palestine as a state. Relations with the Jewish state were also strained by Francis describing Abbas as an “angel of peace” during the two men's May 2015 meeting.

Saturday's meeting will come against a background of deep concern among Palestinians over US President-elect Donald Trump's declared intention of moving the US embassy in Israel from Tel Aviv to Jerusalem.

The Palestinians fear the move would consolidate Israeli control over the ancient city and make it harder for them to have Israeli-annexed east Jerusalem as the capital of a future Palestinian state.

Saturday's meeting will also take place on the eve of an international conference in Paris at which some 70 countries are due to discuss the situation in the Middle East and reiterate support for a two-state solution to the Israeli-Palestinian conflict.