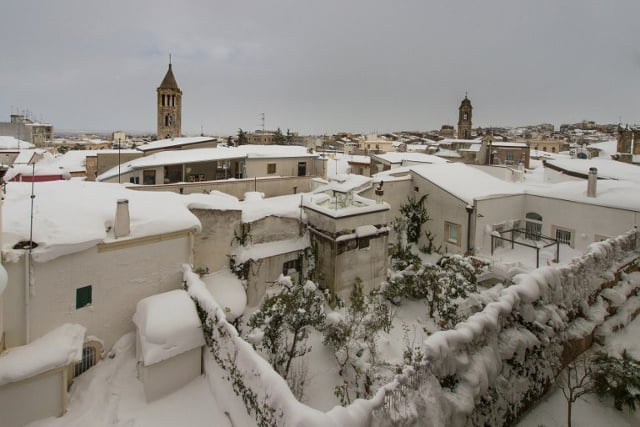 Slightly warmer temperatures on Thursday are due to be followed by ten days of cold, as another mass of polar air sweeps in from northern Europe.

On Thursday, sunshine dominated in the far south and parts of central Italy, while most of the rest of the country was cloudy, with rainfall in Liguria, Tuscany, Umbria, Lazio and Sardinia.

The mercury has risen by 3-6C across Italy, bringing the temperature closer to regional averages for the season, the weather experts at Meteo.it confirmed.

But they warned that relief would only be temporary.

From Friday, a polar air vortex will arrive, “bringing with it very cold and unstable air,” the meteorologists said. Temperatures are expected to drop significantly across the entire peninsula.

The wintery blast is expected to last for ten days, with weather characterized by “frequent rainfall, particularly in the centre-south and more sporadically in the north, with snow at unusually low altitudes in the south, the hilly central regions and parts of the north”.

The cold currents and strong winds are expected once again to hit the centre-south particularly hard, where alarm has been raised over the residents and farms in the area still recovering from last year's series of heavy quakes. Consumer organization Coldiretti has warned that the cost of damage to farmland and animals could be as much as €14 million.

On Thursday, the north-west of the country saw up to 15cm of snow, while there was also light snow cover in the south.

A smoking Mount Etna in Sicily is also covered in a dusting of snow – you can follow a live webcam of the volcano here.

Further snow is also expected from Friday onwards, at increasingly low altitudes as the weekend continues. Sardinia and Sicily will both be affected, as will Emilia Romagna in the north.

There have been school closures in Rome, Milan and the south of the country, while both Lombardy and Piedmont have issued weather warnings for strong winds and freezing temperatures.

Motorists are advised to keep informed about changes in the weather and avoid unnecessary travel.

During the bank holiday weekend's heavy snow and below-freezing temperatures, at least eight people died for weather-related conditions including exposure and hypothermia. Charitable organizations including Caritas are working on blanket collections to assist the homeless in many of Italy's cities.