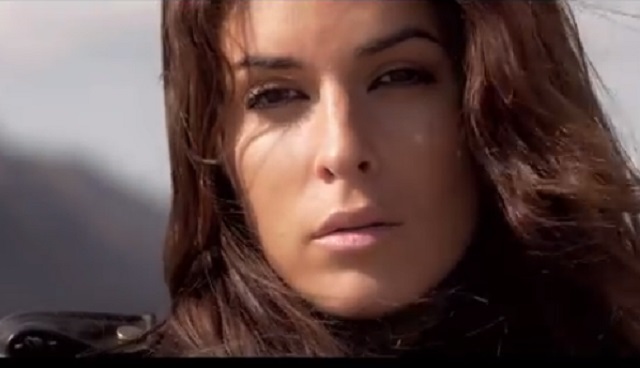 Gessica Notaro in a music video - she was due to release an album this month.

“I'm still alive, don't worry, I can get through this,” said the 28-year-old, Gessica Notaro, according to Italian media reports.

Notaro, from Rimini in northern Italy, is severely injured after an acid attack near her home on Tuesday evening, when a large quantity of acid used to unblock drains was thrown over her face.

Shortly after the incident, Notaro told her mother and police that the culprit was her ex-boyfriend, 29-year-old Jorge Edson Tavares.

Tavares, who has denied any involvement in the crime and said he was with another woman at the time of the attack, has been arrested and faced a preliminary hearing on Friday morning. His lawyer has described him as “very shaken”.

The pair met at the local aquarium, where Notaro worked as a dolphin and sea lion trainer and Tavares as a handyman, and they had a two-year relationship. After Notaro ended the relationship last summer, Tavare was issued with a restraining order after stalking the woman and sending threatening text messages. However, the distance named in the order was reduced from 500m to 50m due to the proximity of both their houses.

Notaro, who has been described by friends as “smiley” and “optimistic”, suffered serious burns to her face and neck and is recovering in the local hospital. Staff there said that it would not be possible to assess the extent of the damage for a few days, and that the greatest concern was potential damage to her sight.

Il Corriere reported that Notaro was relieved her vocal chords had not been damaged by the acid; she is also a singer, with a CD entitled Gracias a la vida due to be released in a few days.

The regional councillor for equal opportunities, Emma Petitti, has described Notaro as “a very brave girl who is ready to get back up”.

She had also been a contestant in the Miss Italy beauty pageant, reaching the final 100 as the representative for the Romagna region in 2007, and going on to work in TV hosting roles before returning to the aquarium in her hometown.

One of the contest's organizers, Patrizia Mirigliani, described the attack as “yet another act of violence against a woman, and using one of the most despicable methods.”

“There is no greater crime than defacing a person’s face in order to erase her identity, her beauty, her smile. These are outrageous attacks which are repeated endlessly,” Mirigliani was quoted by La Repubblica as saying.

Three years ago another contestant in the pageant, Rosaria Aprea, had to have her spleen removed after being beaten up by her ex-boyfriend. Mirigliani said the pageant community was “still grieving” for Aprea's injuries.

2016 figures show that one in three Italian women suffer domestic violence at some point in their lives, and gendered attacks claim over 100 lives in the country each year – the majority at the hands of their partners or ex-partners.

Italy passed a €5 billion law aimed at helping victims of gendered violence, but while the overall number of incidents has seen a slight decline in recent years, Istat data shows that the attacks are becoming more serious, with an increasing number of women fearing for their lives.

Lawyer Lucia Annibali suffered a similar attack in 2013, after her ex-boyfriend paid two men two throw acid in her face. The boyfriend, Luca Varani, was sentenced to 20 years for attempted murder while the attackers were sentenced to 12 years each.

Annibali has become both a symbol of the country's fight against gendered violence and a vocal supporter of the cause, writing a book titled 'My story of non-love'.

Commenting on the attack on Notaro, the lawyer said she was “struck and saddened” by the increasing use of acid in gendered attacks.

READ MORE: 116 women have been killed in Italy so far this year. How can the country tackle gendered violence?