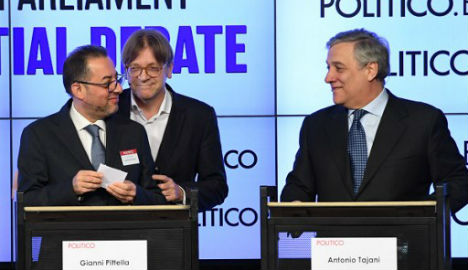 Italians Antonio Tajani (right) and Gianni Pittella (left) are favourites to win the election. Photo: Emmanuel Dunand/AFP
While one of the two Italians is almost certain to win, here is the list of the candidates ranked according to the size of their grouping in parliament ahead of the vote on Tuesday.
ANTONIO TAJANI (centre-right)
Italy's Tajani, 63, a committed pro-European, is standing for the centre-right European People's Party, the largest single group in the 751-seat assembly, and is therefore tipped to win.
Silver-haired Tajani has solid experience at the top, serving as EU transport commissioner in 2008-10 and then as industry commissioner in 2010-14 which helps give him an inside view of the workings of the European Commission, the EU's executive arm.
He entered the European Parliament in 1994 when he was a founding member of controversial premier Silvio Berlusconi's Forza Italia.
Recently he has run into heavy flak over his handling of the Volkswagen “Dieselgate” pollution cheating scandal and the Commission's apparent inability to make VW pay compensation to its European customers similar to the billions demanded in the United States.
GIANNI PITTELLA (Social Democrat)
Pittella, 58, is head of the Social Democratic group, the second biggest in parliament and which counts a large contingent of Italian MEPs. The balding Pittella has been an MEP for nearly 20 years but is not widely known, with limited English restricting his media impact. Critics say he has been overshadowed by Martin Schulz, the German Socialist MEP and outgoing head of parliament.
HELGA STEVENS (Conservatives)
Stevens, 48, has made her political career with Belgium's nationalist NVA party which campaigns for the greatest possible autonomy of the country's Flemish-speaking north. The European Conservative and Reformists Group, ranked third in numbers of MEPs, attracted attention after former British premier David Cameron folded his Conservative Party MEPs into it instead of the EPP. A trained lawyer who is also deaf, Stevens has a formidable political and academic track record, campaigning strongly for people with disabilities.
GUY VERHOFSTADT (Liberals)
Former Belgian premier Guy Verhofstadt is an ardent defender of the European project known for his impassioned pleading of the cause and biting put-downs for those who cannot see the European Union light — particularly his parliamentary nemesis, eurosceptic Nigel Farage of Britain's UKIP.
Parliament named Verhofstadt, 63, as its Brexit negotiator last year and he promised MEPs they would play a key role in the expected difficult negotiations with London.
He has been in the running to head the European Commission several times, most notably in 2004 when Britain, among others, shot down his candidacy.
ELEONORA FORENZA (radical left)
Forenza, 40, another Italian, is a leading figure on the left in the European Parliament. She was elected an MEP in 2014 and was chosen last month as the candidate for the grouping European United Left-Nordic Green Left.
JEAN LAMBERT (Greens)
Lambert, 66, is an MEP for the British Greens party elected for the first time in 1999. She campaigned strongly against Brexit and says that once Britain leaves the European Union, she will continue to work as a champion of democracy around the world.
LAURENTIU REBEGA (far-right)
Romanian MEP Rebega, 40, is the candidate of the Europe of Nations and Freedom Group which is also home to Marine Le Pen's National Front party.
EUROSCEPTICS
The Europe of Freedom and Democracy Group, of which British eurosceptic and Brexit champion Nigel Farage was a leading light, has not so far put forward a candidate.
The final list of candidates will be published at 1600 GMT on Monday.
Url copied to clipboard!