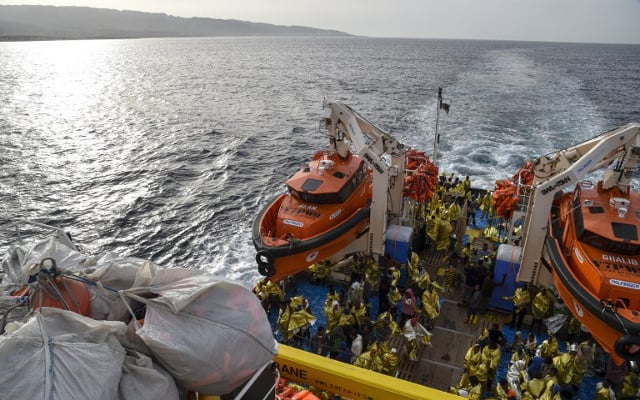 Humanitarian workers from International Organization for Migration (IOM) and the UN refugee agency (UNHCR), recounted harrowing details of the latest major tragedy in waters off Libya after talking to four rescued passengers, two Eritreans and two Ethiopians, who arrived on Monday evening in the Sicilian port of Trapani.

The survivors, three men and one woman, were described as “traumatized and exhausted”.

They said their two-tier, wooden boat had left Libya on Friday with more 180 people packed on board, all of them originally from East Africa.

After five hours at sea, the engine cut out and the boat started to take on water. As it slowly sank, more and more of the people on board were submerged under water.

One of the survivors described his desperate effort to find his wife, who had taken a spot in the centre of the ship.

After hours in the water, the survivors were rescued on Saturday 30 nautical miles from the Libyan coast by a French boat operating as part of the European borders agency Frontex's Operation Triton before being transferred to another Frontex ship, the Siem Pilot.

Siem Pilot, provided by the Norwegian coastguard, arrived in Trapani on Monday evening with the four survivors, four recovered corpses and 34 people rescued from another stricken migrant boat.

The latest deaths and rescues follow a record year for the number of migrants trying to reach Europe on the western Mediterranean route from north Africa to Italy.

Some 181,000 people were registered at Italian ports in 2016 while the UNHCR recorded more than 5,000 deaths and presumed deaths on all migrant routes across the Mediterranean.

Despite the mid-winter weather making crossings particularly perilous, the start of 2017 has brought no sign of departures slowing with some 2,300 migrants already registered in Italy since January 1st.