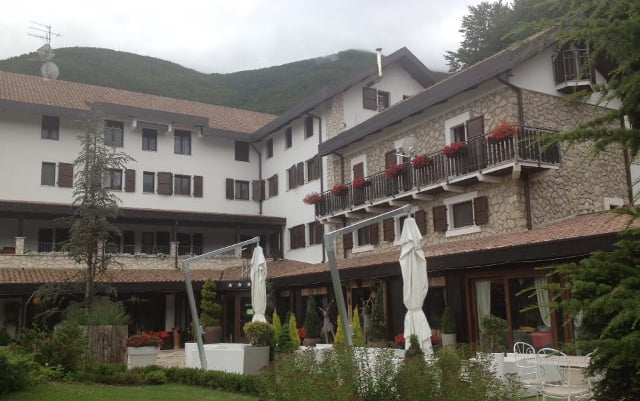 The Hotel Rigopiano, which has been moved ten metres and buried by an avalanche. Photo: Maurizio Cavaliere

Hollywood actor George Clooney is among the fans of the four-star hotel and spa, nestled in the vast Gran Sasso national park.

Clooney visited in autumn 2009, during the filming of The American, Italian media reported. Some of the film's scenes were shot in the l'Aquila province, which at the time was recovering from another tragedy, the earthquake in April of that year which left 300 dead.

Singer Gianluca Ginoble from Italian pop trio Il Volo was another frequent guest – and had planned to stay at the resort this week, but cancelled last minute, narrowly avoiding being caught up in the avalanche. Ginoble sent messages of support to the people of Abruzzo via his social media accounts.

Unfortunately I have still had no news of my friend Roberto, the owner of Hotel Rigopiano.

Italian TV actress Barbara d'Urso was also a Rigopiano regular, who on Thursday described the hotel as her “refuge”.

“I know all the marvellous people who work there, and I'm praying for them and for the rescuers who are doing the impossible,” she said.

D'Urso added that she was particularly fond of the hotel's resident sheepdogs, Lupo and Nuvola, who had had three puppies in December.

According to Abruzzo resident Sabrina Conti, the two dogs survived the tragedy – though there is still no news of the puppies.

“Lupo and Nuvola were the symbol of Hotel Rigopiano, ready to welcome guests affectionately but also to guard the area at night,” Conti wrote on Facebook.

According to Conti, the two dogs were made their way to a small town in the Farindola comune, where they were taken in and fed by a local resident.

“They were able to escape from the avalanche in time and travelled many kilometres through the snow. A sign of hope at a difficult time.”

One of the missing puppies.

Maurizio Cavaliere, a journalist and blogger from the Molise region, shared his own memories of the hotel with The Local.

“A shiver runs down my spine at the thought that such an impressive building, including the pools and spa, was moved ten metres by the force of the avalanche,”  he told us.

Cavaliere visited the hotel eighteen months ago with his wife, Rossella. It was Rossella's birthday and he remembers that staff prepared an amazing cake for the occasion. “Everything was fantastic: the landscape, the food, the spa, the warmth of the place and the people.

“It was June, and we enjoyed three days there, bathing in the open, meeting the other guests, great food. I remember playing pool and reading magazines in the small library. Now it's a race against time to find any survivors in the snow and uprooted trees which have invaded the hotel.”

As a skier himself, Cavaliere is aware of the difficulties in reaching the area through heavy snowfall. “It worries me that to reach this paradise, it takes quite a while from the closest inhabited areas, which are small villages – even longer from the larger towns,” he notes.

“It's a classic mountain hotel, isolated in order to guarantee a different experience, but in winter, in heavy snow there will be problems, and in an avalanche, you're isolated. These are considerations which will be taken into account now, after the tragedy. That should have happened before.”

Cavaliere wasn't alone in sharing memories of happy days spent at the mountain idyll: in reviews posted on the hotel's Facebook page, “relaxing” was the most frequently used word, and guests had recently shared photos of time spent in the heated pools amid snow-covered scenery.

One guest, Ilaiza, wrote: “The memories of the three times I have been your guest resurface in my mind, but also in my heart heart. I have spent important moments and met wonderful people in this fairytale place.”

Another visitor, Angela, wrote at New Year that she had stayed at Rigopiano four times in different seasons. She described the hotel as “an enchanted place in the heart of the Gran Sasso… you cross the gate and are enveloped in a magical atmosphere.”

On Tuesday, hotel staff had tweeted: “A dream Tuesday at Rigopiano… the snow has given us the gift of spectacular scenery!”

The below publicity video for the hotel shows all its facilities, including pools, a luxury spa and restaurant, as well as the idyllic-seeming surroundings.

Shortly after news of the avalanche broke, the hotel's Google listing was updated to state it was 'permanently closed' – a change Il Corriere daily described as “cynical”. Now, the listing reads 'temporarily closed', but as search efforts enter their second day and hope of finding further survivors diminishes, it is hard to say what the future will hold for Hotel Rigopiano.