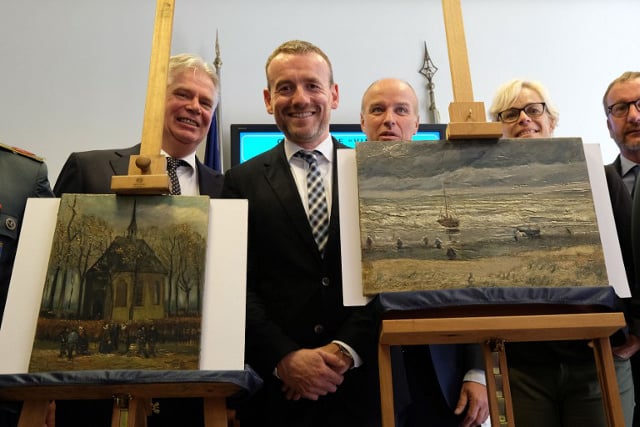 The director of the Van Gogh Museum poses with the stolen artworks. Photo: Mario Laporta/AFP

The 1882 “Seascape at Scheveningen” and the 1884/5 “Congregation leaving the Reformed Church at Nuenen” will soon be on their way after an Italian judge cleared their return, Van Gogh Museum director Axel Rueger said.

“We've just heard that the judge has ordered the release of the two recovered Van Goghs,” Rueger said in a statement issued in Amsterdam.

“The two canvasses will be formally handed over in the near future. Precise date hasn't been fixed yet, but it's expected to happen quickly,” he said.

Italian investigators in late September raided a home belonging to infamous drug baron Raffaele Imperiale, who was arrested ten years ago at the same
location at Castellammare di Stabia, some 34 kilometres (21 miles) southeast of Naples.

The area is a notorious hotspot for Neapolitan mafia activity.

The two paintings – which have since been confirmed as authentic and are worth millions – were stolen in a daring raid in 2002 by thieves using a simple ladder and a length of rope.

The criminals broke into the museum in downtown Amsterdam on December 7th that year using the ladder to climb onto the roof, where they broke through  a window and used a rope to get in and out of the heavily fortified building.

The heist left Dutch police flabbergasted at the time.

Despite launching an international manhunt, the paintings' whereabouts were unknown until being recovered in the Naples area, the Van Gogh Museum said.

“It is excellent news that the paintings will shortly be returning to the Netherlands,” Dutch Culture Minister Jet Bussemaker said.

“Everyone, both young and old, should soon be able to enjoy these works again at the Van Gogh Museum,” she said.

Italian media at the time of the recovery reported that Imperiale, who belongs to the Amato-Pagana clan, is believed to have subsequently fled to Dubai,
where he owns a construction company.

A new arrest warrant was issued against him last year.