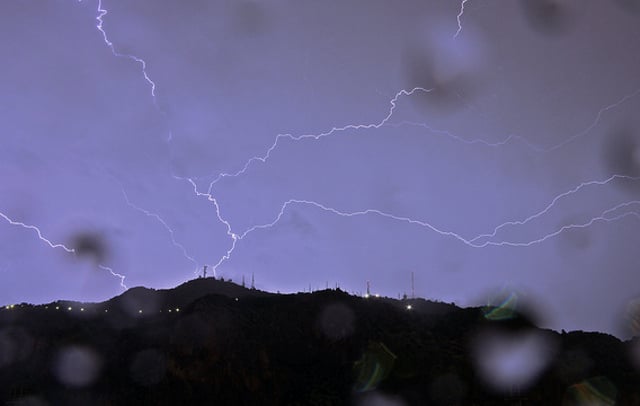 A red alert – the highest possible level – will remain in place in the region until at least midnight on Monday, as meteorologists have warned of more rainstorms, heavy winds and stormy seas throughout the day.

A 67-year-old died in Castronovo di Sicilia, Palermo after his car was swept away by water. The three other people in the vehicle were saved by firefighters, who had to rescue several motorists from the flooded streets.

In some areas, over 200 mililitres of rain fell in less than 12 hours – the map below shows just how much rain has fallen across the country.

People in the Catania area have been told by mayor Enzo Biano to stay in their homes unless absolutely necessary, and schools are closed in Catania, Taormina and Reggio Calabria.

Families in some parts of Calabria have been evacuated as a precautionary measure, for fear of further floods.

Several rivers in Sicily have burst their banks, disrupting road and rail traffic and causing small landslides. A panoramic viewpoint in Balestrate, Palermo collapsed on Sunday, with large pieces of the structure falling onto the nearby railway line.

On Sunday evening, the prefecture of Reggio Calabria activated a crisis unit to deal with the problems caused by the extreme weather.

Partial road closures are in place across Sicily, particularly in Palermo and Agrigento, while boat travel to some of the southern islands, including the Aeolian Islands and Lampedusa, was suspended. Several areas are without electricity.

As well as Sicily, the southern regions of Basilicata and Apulia are also severely affected by downpours, and a yellow weather warning for wind and rain is in place in the Marche, Abruzzo and Molise in central Italy.

Italy has been battling extreme weather for the past two weeks, with below-freezing temperatures and heavy snowfall, particularly in the centre-south of the country.

The harsh conditions complicated recovery efforts after a series of four major earthquakes in l'Aquila, which are thought to have been the cause of a deadly avalanche in Abruzzo on Thursday.

On Monday, the centre-south continued to experience strong winds, though a slight increase in temperatures means the snow – up to two metres deep in some areas – has finally begun to melt.