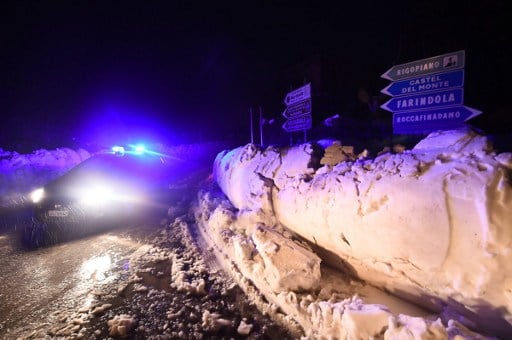 An emergency service vehicle heads to the avalanche site. Photo: Filippo Monteforte/AFP
One team of 13 from Bellinzona and another of 15 from Riazzino, both equipped with snow ploughs and other vital kit, plan to stay in affected areas until at least Wednesday, they told Swiss media on Saturday.
Speaking to Italian-language Swiss broadcaster RSI, Giovanni Palmieri said it was “the apocalypse” in the affected villages, which have been cut off by three metres of snow and have no electricity.
“There are big difficulties, the avalanche risk is constant,” he said, adding that they would stay longer than Wednesday if necessary.
The Riazzino group headed to villages and hamlets near the Hotel Rigopiano that was devastated by an avalanche last Wednesday evening following four earthquakes of more than five magnitude earlier in the day.
So far nine people have been pulled alive from the wreckage by rescuers working in dire conditions, with 23 more thought to be trapped inside. Five people are confirmed dead.
Danilo Cau, the owner of a Ticino company that sent snow ploughs and generators with the Riazzino group, told ATS the Swiss workers had been “greeted like heroes”.
These hamlets “have been abandoned to their fate for several days without electricity, and are starting to run out of provisions”, he said.