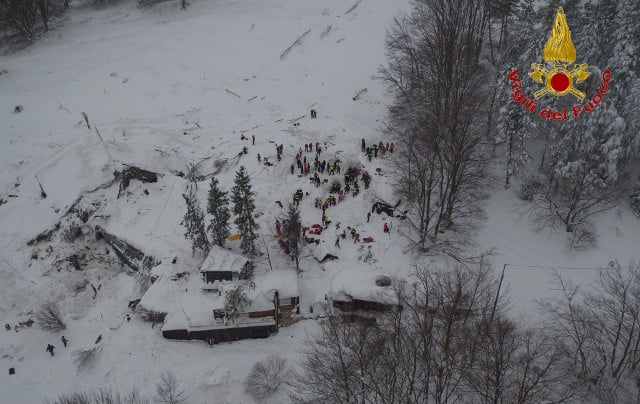 “We are not 'snow angels' nor heroes, we don't want any medal,” Italy's alpine rescue team wrote on its Facebook page on Sunday evening, as people rushed to praise them for their work. “We are certainly technically prepared, but above all, we love the mountains and the community. We are just doing our duty.”

However, videos shared by the various groups involved in search effort show the difficult conditions they have worked in in order to save the 11 survivors who have been found so far.

The Abruzzo region was covered in around two metres of snow when the avalanche hit on Thursday, and a lack of available snow ploughs meant the road was not cleared until the following day. Rescuers instead arrived on skis and by helicopter.

Italy's national police service shared the aerial video below, which shows how the four-star hotel had been completely submerged by snow. Police later said the force of the snowslide had been equivalent to that of 4,000 trucks.

This video shows the first efforts to reach the hotel, digging with spades and using helicopters to get to the area blocked off by snow. Firefighters were able to enter parts of the hotel, where rooms were covered with snow and tree branches as shown in the video.

Firefighters also captured on camera the moment a young boy was pulled from the rubble to cheers and applause from the rescue team. He was one of the first survivors to be pulled to safety.

Three further children were rescued, one girl and two boys.

The footage below, taken by drone, shows firefighters digging by hand the buried hotel.

And as search efforts continued at the start of this week, the following video shows how technology is aiding in the search. The devices were used to track mobile phone signals, detect heat and stay in contact with the control room at the rescue operations centre.

Some of the tech equipment being used in search efforts at #Rigopiano, where the death toll has sadly risen to 14https://t.co/zmyNTZuUYE pic.twitter.com/5466o5kZZx

On Tuesday, rescuers said there was “still hope” of finding survivors even as the death toll of the tragedy rose to 14, with six bodies recovered between Monday night and midday on Tuesday. Firefighters shared a video showing an officer crawling down into one of the buried rooms.