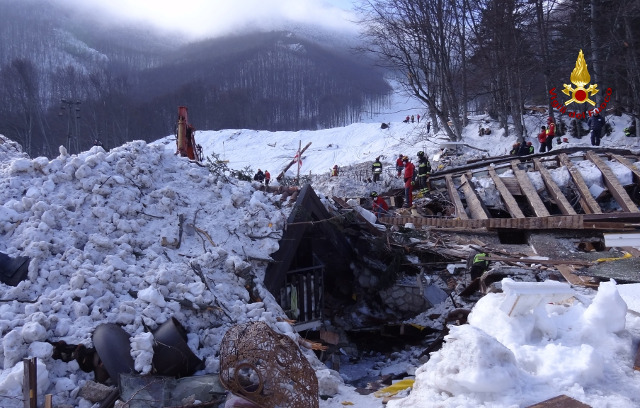 The search for bodies ended on Wednesday night, with the last of the missing people accounted for, bringing the death toll to 29. Eleven people survived the disaster, including all four of the children inside the hotel at the time.

The video below, filmed by an emergency services drone, shows the devastation to the area, as firefighters continue to work at excavating the four-star resort described by former guests as a “refuge” and a “paradise”.

“We are not 'snow angels' nor heroes, we don't want any medal,” Italy's alpine rescue team wrote on its Facebook page on Sunday evening. The rescuers had worked 14-hour shifts in the mountain region, using skis and helicopters to reach the area and at times digging with just their hands in the effort to reach those trapped under the rubble. “We are certainly technically prepared,” the team wrote. “But above all, we love the mountains and the communities that live there. We are just doing our duty.” An investigation has been opened to assess whether the disaster could have been prevented or if authorities could have reached the site sooner, after it emerged that the first emergency services vehicle was dispatched almost two hours after the first call for help. The deadly avalanche followed the heaviest snowfall the region had seen in decades and may have been triggered by a series of four earthquakes above magnitude five, which rocked the region earlier the same day.

The combination of extreme weather and quakes claimed at least 11 lives unrelated to the hotel disaster, six of them in a helicopter crash near a ski resort on Tuesday.

PARTNER CONTENT
‘It really feels like a dream come true’: working in a Paris palace hotel
Url copied to clipboard!