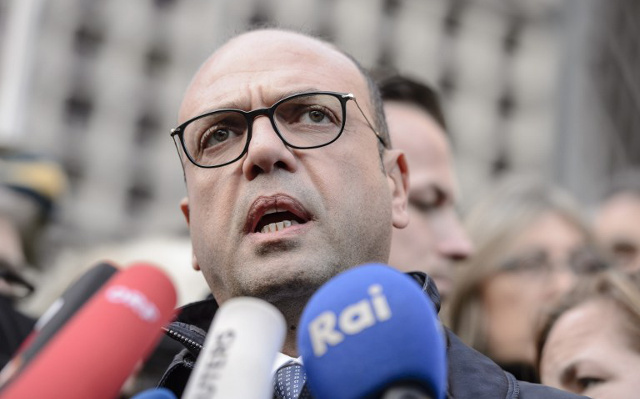 Europe “is not in a good position to give opinions about the choices of others. Or do we want to forget that we too erect walls in Europe,” said Alfano in an interview with the daily Corriere della Sera.

During Europe's 2015 migrant crisis, as tens of thousands of desperate people arrived mainly from the war-torn Middle East, the Balkan countries shut their borders with Hungary putting up fences to stop the influx.

Alfano, who was interior minister until December, noted however that Italy has taken a different position on refugees and migrants.

Italy as a “world champion” rescuer of migrants crossing the Mediterranean and welcoming them to its shores, can attest to the fact that “security and solidarity can go hand in hand,” he said.

“Our vision is different (from Trump's) and up to now has shown to be successful with regard to security,” he added, noting there was no conflating of migration and terrorism.

Trump on Friday signed a three-month ban on travelers from seven Muslim-majority countries and suspended the arrival of refugees to the United States for at least 120 days, provoking criticism and protests around the world.

Several other Italian politicians, including prime minister Paolo Gentiloni and Interior Minister Marco Minniti, had confirmed Italy's commitment to “openness” and closeness to the Muslim community over the weekend, but had not mentioned Trump by name in their statements.

Laura Boldrini, the Speaker of the House, called for stronger condemnation of Trump's ban, which she said was an “unmistakable and alarming sign” that the president was targeting people based on their religion and ethnicities.

READ MORE: 'What Trump is doing affects us all': Italy's politicians speak out against travel ban