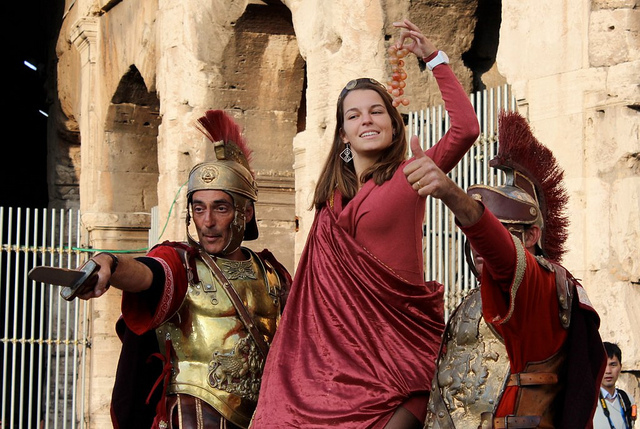 With these bits of lingo, you'll fit right in. Photo: Grace.Donaghue/Flickr

The Roman dialect was singled out by poet Dante as the ugliest in all of Italy.

The writer said it wasn't worthy of being described as a 'vulgar tongue' but was merely 'profanity'. In fact, some people call the dialect 'Romanaccio' (instead of the more formal 'Romanesco'), with the suffix 'accio' carrying negative connotations (a 'giornataccia' for example is 'a terrible day').

But there's a beauty to the language. Each word is spoken as if it's being savoured, and the insults are wonderfully creative. What's more, you'll need to understand it if you want to keep up with quick Roman chatter.

To speak like a local, two starting points are to drop vowels at the starts of words and double up on consonants. For example, articles (that's un, uno and una) lose the 'u' and become 'n, 'no and 'na, while 'buono' becomes 'bonno' or 'bonn'. Another peculiarity is that 'l', when followed by a consonant, is pronounced like 'r' – so you're living 'la dorce vita'.

'Aò' is a Roman greeting, used between friends in place of 'ciao' or 'buongiorno', or occasionally as an exclamation, added to the start or end of a sentence for emphasis. If you want another local way of saying hello, the term 'bella!' can also be used – either after 'aò' or on its own. When used in this way, it's different from the adjective 'bella' meaning 'beautiful', so it doesn't mean you're calling someone attractive. Oddly, Romans are more likely to describe good-looking people as 'bono' or 'bona' (the dialectal form of 'buono/a') which in Standard Italian rarely refers to looks.

Once you've exchanged your 'aò bella's, you'll want to find out how your Roman friends are doing. In Standard Italian, this would be 'come va' or 'come stai', but in Romanesco, the verb 'buttare' (meaning 'to throw') is used. Note the 'te', rather than the expected 'ti' – this is a typically Roman pronunciation.

The drawn out 'andiamo' you learned in class becomes 'annamo' or simply ''nnamo' on the streets of the eternal city. Verbs in particular tend to get shortened in Romanesco, often dropping endings: 'andiamo a mangiare' (let's go to get something to eat) becomes 'annamo a magnà', for example.

Consonant clusters like 'nd' are often eroded to double consonants in Roman – try repeating 'andiamo' lots of times very quickly to see how it got there – and the 'gn' sound, which can be a tricky one for non-native speakers, helpfully becomes 'gn'.

Different from 'andiamo', 'daje' means 'come on' usually in an exasperated sense ' (like 'dai' in Standard Italian). So you might say it when you're annoyed by someone's bad driving or need a friend to hurry up, but it can also be used in the sense of cheering on a team, so 'daje Lazio!' means 'come on Lazio!' As for pronunciation, it's something like 'eedaaayeh!' – draw out the syllables as long as you please. You'll notice that 'j' is common in Romanesco, despite only appearing in Standard Italian in foreign loan words.

'Ammazza' in Italian translates as 'kills' or 'slaughters', but in Rome it's generally used to express admiration or surprise, similar to 'wow'. It can also be used to show disappointment, so just listen carefully to the tone.

It's not clear exactly how the expression came to be, but as languages evolve, meaning often becomes diluted through repeated use (think about the evolution of the meaning of 'literally' in English) so exaggerated terms are brought in to strengthen them. In a similar way in colloquial English, someone might describe something as 'dead good'.

'Tajarsi' has the same meaning as 'divertirsi' – to have fun or enjoy yourself – and you use it in exactly the same way, as a reflexive verb. So 'mi sono tajato' (or 'mi so' tajato') means 'I had fun'.

You can also use variants of the word: 'tajo' can be an adjective to describe something funny – try exclaiming 'che tajo!' next time your Roman friends make a joke – or even as a noun to refer to someone who's always making you laugh. 'Avoja' has its origins in the term 'hai voglia' (you want to) – the 'gl' sound is softened in a similar way to the other consonant pairs we mentioned before, and it's sometimes written 'avoia'. It's stronger than a simple 'yes', so if someone asks if you like pasta and you respond 'Avoja!', you're really emphasizing how much you love it.

Picture the scene: you ask a friend what they thought of Mamma Mia 2, and they respond with an emphatic 'da paura!'. You know that 'paura' means 'fear', and wonder what it was about the Abba-themed musical that frightened them so much. Or you ask what they think of your new dress and feel slightly hurt when they use the same expression. But actually, 'da paura' is a compliment: the slang term is used to refer to something impressive or cool – in fact, it's so good it's scary.

'Scialla' is the Roman form of 'tranquillo' (calm), and if you've ever chatted to an Italian, you'll probably have observed that this word makes a regular appearance, in the sense of 'don't worry' or 'calm down' when the person you're talking to is getting into a panic. The word comes from Rome's posh Parioli district, and describes someone who has plenty of money and likes to show off about it – they probably have clothes by the top designers and the fanciest car. You'd use this word to describe someone who doesn't have much personality of their own, and just buys things because they're the latest trend.

There's no exact translation of 'abbiocco' in English; it refers to the specific feeling of having eaten and drunk so much that you feel like you want to lie down. Definitely one which will come in useful in Italy… This alliterative little phrase can mean a few different things, not all of them pleasant, so it's best not to use it yourself unless you're confident you won't be misunderstood. 'Tacci' is a shortened form of 'mortacci' (ancestors) and it's often used as a vulgar insult, meaning something like 'a curse on your ancestors!' Among young Romans, though, it can be used as a friendly or even affectionate greeting.