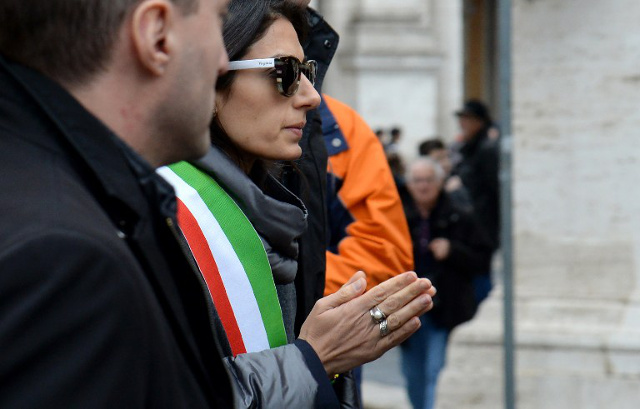 The Five Stars (M5S) – which considers itself the antithesis to corrupt political parties – is pushing for an early general election in Italy and Raggi's potential fall is worrying many who fear it may suffer in the polls.

The embattled mayor was responding to prosecutors' questions about suspected corruption by one of her close advisers, Raffaele Marra.

Marra, seen as part of Raggi's inner circle, is suspected of accepting an illegal payment from a real estate developer in 2013 while he was head of housing policy under former Rome mayor Gianni Alemanno.

Raggi not only defended Marra but also approved the hiring of his brother, Renato Marra, as head of tourism for the city – and it is about this appointment that she was being grilled by prosecutors.

While the mayor has insisted she chose Renato independently, investigators suspect she was allegedly bribed to do so by Raffaele.

And as the interrogation continued behind closed doors on Thursday, Italian media pounced on another nugget published by the Espresso magazine, according to which an associate of Raggi's bought her a life insurance policy worth some 30,000 euros ($32,300).

The magazine said it was purchased in January 2016 by Salvatore Romeo,  who Raggi later appointed head of her political secretariat, tripling his salary.

When news of the salary bump leaked in December, the M5S demanded Raggi ditch Romeo and began to distance itself from her. Party leadership also stripped her of the power to make “important decisions”.