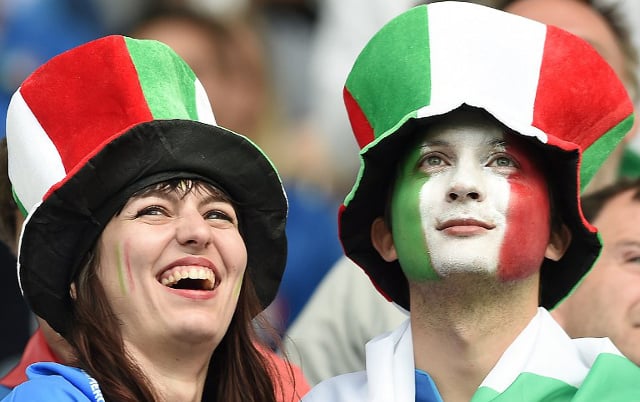 Sorry, facepaint and a hat in the colours of the flag aren't quite enough to be considered 'truly Italian'. Photo: Nicolas Ducat/AFP

The study, published on Wednesday by Pew Research Centre, asked Italians which factors were “important for being truly Italian”.

Less than half of Italians – 42 percent – said that being born in Italy was “very important” to national identity.

However, this was still one of the highest figures among the 14 countries surveyed. In Europe, only Hungarians and Greeks – two countries which, like Italy, have borne the brunt of the ongoing migrant crisis – were more likely to say birthplace was an important factor in national identity, at 52 and 50 percent respectively. Fifty percent of respondents in Japan gave the same answer.

In Sweden, just eight percent agreed, and in Germany, Australia and the Netherlands the figure was below 20 percent as well.

The survey was conducted between April and May of last year with more than 14,000 respondents across 14 countries.

So what emerged as the key factor in becoming Italian? Luckily, it's something anyone can achieve: learning the language.

“Language far and away is seen as the most critical to national identity,” Pew researchers noted. The study showed that it was considered the most crucial factor in every single country surveyed.

Almost six in ten Italians agreed (59 percent), though this was the lowest score of any country, joint with Canada.

That compared to 84 percent in the Netherlands, 81 percent in Hungary and the UK, and 79 percent in Germany.

Half of Italians thought that sharing national culture and traditions was a key factor, placing Italy in the middle of the pack. Hungarians prioritized national customs the most, with 68 percent labelling them a very important determiner of national identity, compared to just 26 percent of Swedes.

Prioritizing cultural traditions was linked to political allegiance. In Italy, supporters of the far-right Northern League were more likely to agree that following national traditions was important for being Italian, following a Europe-wide trend that those on the political right found this to be important.

The survey also looked at whether religion had any bearing on national identity. Overall, the majority of people disagreed, with Greece the only country where more than half held this view.

In Italy, 30 percent said that being Catholic was key to being Italian, but a strong generational divide emerged. That figure rose to 40 percent among the over-50's – the most of any demographic other than Greek over-50's.