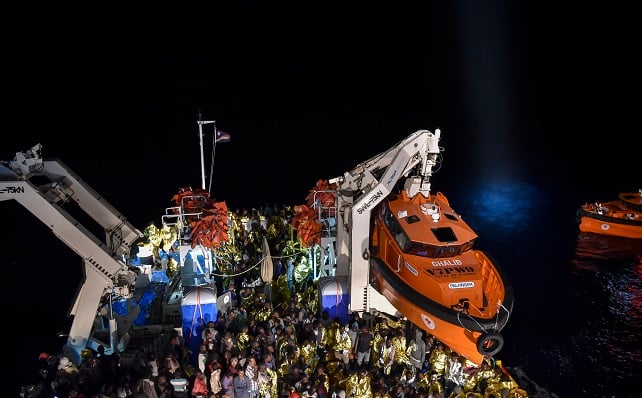 Migrants and refugees aboard one of the rescue ships. Photo: Alberto Pizzoli/AFP

The number of people pulled to safety in the past two days brought to 4,500 the total saved since Wednesday.

The latest rescues came after EU leaders agreed at a summit in Malta on Friday on moves to curb mass migration to Italy from Libya.

Among the measures was a strategy to “break the business model” of traffickers who helped 181,000 mainly African migrants enter the EU via Libya and Italy last year.

On Saturday, Libya's coastguard said it had stopped more than 400 African migrants attempting to reach Europe.

The same day, however, another 600 people were rescued by several ships, most of them operated by the Italian coastguard.

And then on Sunday, 900 migrants travelling on three rickety boats were rescued by a Spanish navy ship taking part in the EU's Eunavfor Med mission, as well as by merchant navy vessels.

Rights groups have criticized the EU's bid to work with lawless Libya to stem the migrant flow to Europe, warning that turning boats away could result in children being sent back to squalid detention centres.

READ MORE: 'EU migrant plan will send children back to a living hell'

Some 8,500 people making desperate bids to reach Europe have been rescued at sea since the start of the year, while at least 227 people are either missing or feared dead. This follows a 20 percent surge in boat migrant numbers last year, despite efforts to close the route.