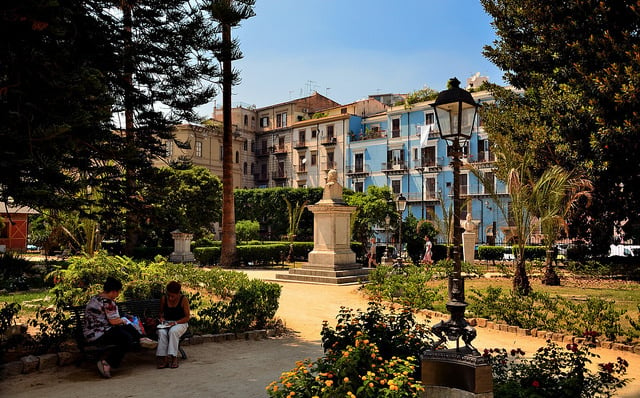 When the city was awarded the 2018 Capital of Culture title, its mayor said “we have all won”. He added that the most important aspect of the city's culture was its “culture of welcome”, referring to Palermo's efforts in assisting the thousands of migrants who have arrived at its port over the past few years, and this is the context in which most visitors are likely to have heard about the Sicilian capital.

But there's more to Palermo than its ports, and plenty of treasures await visitors. So here are ten reasons to head south and visit the city, which will host special events and exhibitions throughout the year.

This could be said of most of Italy, it's true, but what's great about Palermo is the way in which so many different nations and cultures have left a mark on the city. Its strategic military and trading position attracted invaders from around the world, including the the Carthaginians, the Greeks, the Romans, the Normans, the Swabians, the French and the Spanish Bourbons, to name just a few.

Each group had an impact on the city's architecture, language and art, meaning the city's cultural sights are wonderfully varied and it's fascinating to see how each of these different cultures interacted. The Spanish invaders, for example, named one of the squares Piazza Pretoria (Square of Shame) due to the nude 16th-century statues of mermaids and nymphs – the name also refers to perceived corruption of city authorities.

The mixture of Western, Islamic and Byzantine styles is the reason many of the region's churches have been granted Unesco World Heritage status, and lots of them are free to visit. Make the stunning Palatine Chapel (above) the first stop on your tour to see the ornate mosaics, and include a stop at the cathedral (below). There's also 'the Church that isn't there', the name given by locals to the ruined Santa Maria dello Spasimo, which today is used for concerts.

Are you the kind of visitor who turns up your nose at tourist buses, or perhaps you just don't want to battle with the crowds at the Colosseum or Pantheon? Despite its beauty, Palermo is much less well known than the likes of Rome, Venice and Florence, meaning you'll often be forced to practise your Italian.

Remember what we said about Palermo's importance as a trading centre? That spirit still lives on in the city's lively markets, Vucciria (meaning 'chatter' or 'hubbub' – just follow the noise and you'll find it), Ballarò and Capo, where you can buy cheap food, vegetables and even cheap vintage clothes, all while inhaling the scents of flowers and spices and taking in the bright colours. Italy's largest botanic gardens can be found in Palermo. Explore all 25 acres of the Orto Botanico – even in the chillier months of the year, the Winter Garden greenhouses are beautiful. More green spaces can be found at Villa Giulia by the seafront, a 19th-century landscaped park, the Villa Bonanno, which has striking palm trees, and the Giardino Inglese in the city centre, which is a perfect spot for people-watching as workers gather there during the long Italian lunch break.

One delicious reason to visit the Sicilian capital is the food, so do as the locals do and start your day with a coffee and a pastry. The local specialities include both sweet and savoury treats, from cannoli (crispy cream-filled pastry shells) to sfincioni (a variation on foccaccia) to arancini (breaded rice balls), so make sure to try out a few different bakeries as you wander round the town.

If you like your holidays with a macarbre twist, head to the Catacombe dei Cappuccini to see the mummified remains of the 16th-century Capuchin monks and other locals who asked to be buried in their crypt – it became a bit of a status symbol. Years ago, families would visit the catacombs to pray with their deceased loved ones, and there are thousands of bodies there, in different states of preservation, and some set in particular poses.

On a brighter note, the warm weather and gorgeous coastline are the main reason most tourists flock to Sicily, and many of the island's most beautiful beaches are just a short way from Palermo. Mondello beach – which you'd never guess was a former swampland – is the closest to the city centre and the largest in the area, while the quiet Arenella beach is in the very heart of the city but rarely busy.

As Sicily's capital, Palermo is the island's main travel hub, and you can explore the region by hopping on a train at the central station to explore the quaint towns and villages dotted around the coast, or head to one of the island's cultural treasure troves, Cefalu, Messina, or Taormina. Alternatively, take the ferry to Naples, Sardinia or Genova, or a long-distance train to mainland Italy to extend your trip.

Off the beaten track

Palermo is small enough to explore on foot, meaning you can take plenty of detours to duck down sidestreets and take a closer look at curiosities you pass on the way. There are no shortage of quirky sights in Palermo, for example the firefighters' headquarters, a striking example of fascist-era art deco design tucked in amongst ancient buildings. Make sure you take the hike (or the bus, for a more relaxed journey) to the Sanctuary of Santa Rosilia, a church and convent carved into a cave at the top of a hill. Piazza Pretoria in the centre of the city. Photo: CucombroLibre/Flickr

Want more tips on exploring Italy? Check out our travel section for the latest guides, features and travel news.

The historic Venice Carnival – a tradition which dates back to the late 14th century – will be back in all of its splendour this year as the upcoming edition of the festival will be the first one without pandemic-related restrictions since 2019.

As the undisputed queen of Italian Carnival, Venice will once again put on a full programme of water parades, masked balls, fine dining experiences and street art performances spread over 18 days of sheer carnevale fun.

If you’re planning on taking part in the city’s Carnival celebrations, here’s a quick guide to this year’s main events.

What are the dates?

The Venice Carnival will officially start on Saturday, February 4th with a night parade streaming down the city’s iconic Grand Canal accompanied by music, dance performances and light shows.

The parade will kick off two weeks of events, unfolding both in the centro storico (city centre) and on the smaller islands of the lagoon.

The most popular and widely anticipated events of the Venice Carnival are scheduled to take place during those days. However, that will also be the time when the city’s calli and squares will be most crowded.

What are the main events?

Celebrations will start with the above-mentioned floating parade on Saturday, February 4th, and continue on the following day with another water parade involving traditional Venetian vessels and captained by the beloved Pantegana (a boat shaped like a giant sewer rat).

Apart from that, the Festa delle Marie – a historic beauty pageant during which 12 young local women are dressed up in Renaissance costumes, paraded throughout the city, and then subjected to a vote as to which of them makes the best Maria – will start on Saturday, February 11th.

The winner of the contest will be announced in Saint Mark’s Square on shrove Tuesday, the final day of the festival.

Original Signs, a music and dancing show performed on six floating stages set within the iconic Venetian Arsenal (the former seat of the Venetian navy), will begin on Friday, February 10th, with performances running on a nearly daily basis until the end of the festival.

Original Signs will run alongside Original Sinners, a fine dining experience followed by a masked ball at the magnificent Ca’ Vendramin Calergi, a 15th century palace facing the Grand Canal which is also the current seat of Venice’s Casino.

As with Original Signs, the event will be available to the public on multiple dates. 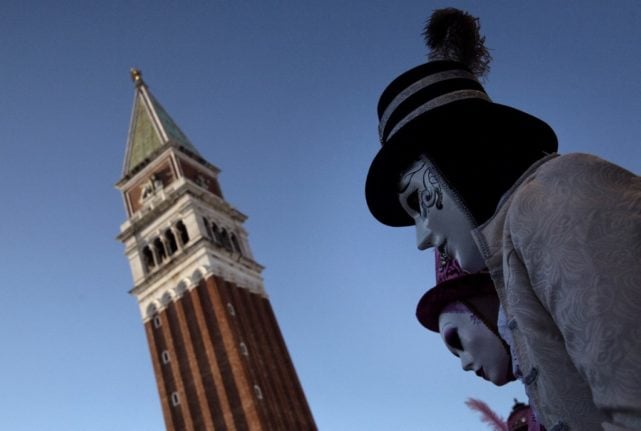 The historic ‘Flight of the Angel’ will not take place this year due to ongoing work in St Mark’s Square. Photo by Tiziana FABI / AFP

Aside from major events, street art performances, workshops, exhibitions and seminars will take place at various venues across the city for the entire duration of the festival. Some of these require booking in advance, which you can do on the Venice Carnival official website.

On a rather sombre note, the Volo dell’Angelo (‘Flight of the Angel’), the traditional ceremony in which a costumed woman ‘flies’ down a cable from the bell tower in Saint Mark’s Square to the centre of the piazza, will not be performed this year due to ongoing repair work.

How busy will it be?

The 2023 edition of the Venice Carnival is expected to mark a “final return to normality”, according to local media.

And, with just a couple of days to go until the official start of the festival, it looks like the floating city is about to experience pre-pandemic numbers of visitors – current estimates indicate that around half a million people will visit the city over Carnival.

According to Claudio Scarpa, president of Venice’s Hoteliers Association, local hotels “will soon be all but fully booked for weekends”, though large numbers of bookings are also being registered on weekdays, especially those in “the last stages of the festival”.

Given the expected turnout, local transport operator ACTV will enhance their services for the entire duration of the Carnival to avoid overcrowding on buses and water buses.

For more details about the Venice Carnival and bookings, see the festival’s official website.