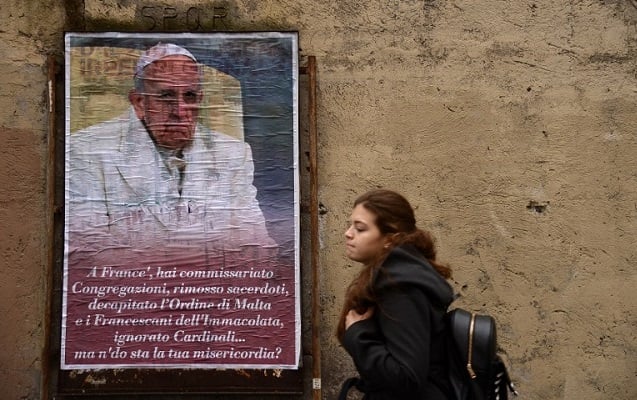 A woman walks past one of the offending posters. Photo: Filippo Monteforte/AFP

Dozens of the illegal fliers appeared mysteriously around the Italian capital Saturday picturing a stern-looking Pope Francis, a list of accusations against him, and the words “Where's your mercy?” – turning the pontiff's call for a more merciful church back on him.

Police were trawling through security camera footage to track down the culprits as Rome city council said it had pulled down 200 posters while those remaining had been covered up.

No group took credit for the stunt, but Vatican watchers said the fact the main complaint referred to the “decapitation” of the Knights of Malta made it likely they came from conservative quarters.

The posters appeared on the same day that Francis appointed his own special delegate to the ancient aristocratic order, after stepping in to stop the firing of its Grand Chancellor, in a move that left traditionalists spitting.

The move publicly sidelined prominent US conservative Cardinal Raymond Burke, who has been outspoken in his disapproval of Francis' efforts to reform Church teaching on questions related to the family, marriage and divorce.

“Ah Francis, you've taken over congregations, removed priests, decapitated the Order of Malta and the Franciscans of the Immaculate, ignored Cardinals… but where's your mercy?” it reads.

The reference to the pope ignoring cardinals is believed to relate to four cardinals, including Burke, who sent a letter to Francis at the end of last year in which they challenged the head of the Roman Catholic Church over his teachings on the family.

Burke publicly warned Francis in November it may be necessary to make a highly rare “formal act of correction” if the Argentine did not answer the letter – a bold and almost unheard of challenge to his authority.

The mention of the removal of priests likely refers to allegations that the pope ordered the sacking of prelates from a Vatican department. In terms of the Franciscans, the pope intervened in the religious order early on to restrict the use of Latin mass, Cruxnow.com said.

The 80-year old pontiff, who was elected in 2013, has proved a divisive figure, hailed by some for his “progressive” attitude – refusing to judge those guilty of church sins, such as single mothers and gay people – but criticized by others for being too “liberal”.

The climate in the tiny Vatican city state has become increasingly acrimonious and watchers warn of a possible show-down with the conservatives. Francis said at the end of last year that he was “not losing any sleep” over the in-fighting.

On Sunday he made no reference to the posters but called on the faithful to stay away from “polluting germs of selfishness, envy, slander”.

The poster was written in local dialect. The Italian capital has a long tradition of anonymous political expression; protest graffiti was used in ancient Rome and, from the 16th century onwards, criticisms in the form of poems or witticisms were strung up on well-known statues in the city.