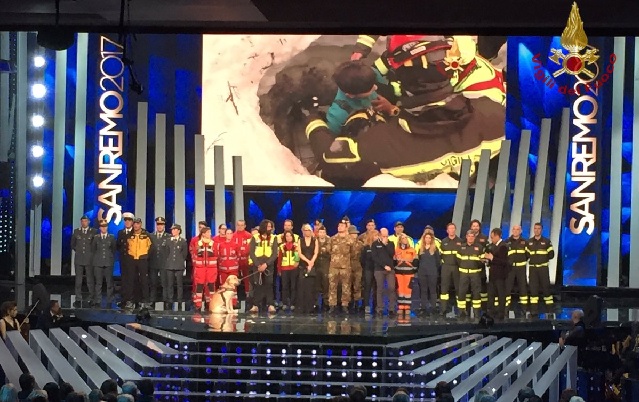 The rescuers take to the stage. Photo: Vigili del Fuoco

But on Tuesday, the first night of this year's festival, the presenters invited some “everyday heroes” onto the stage.

Firefighters, alpine rescuers, police officers and even one brave rescue dog took to the stage of the Ariston Theatre, to huge applause.

“A show as important as Sanremo has a duty to applaud the men and women who every day dedicate their lives to others,” said Conti. “The men, women and animals.”

“Heroes are those who don't crumble, who don't cry, who do their duty and go home without fame or money,” added De Filippi. “The important thing is not to forget them.”

Footage of some of the rescue efforts – including the moment firefighters pulled two young children from the rubble of the avalanche-hit Hotel Rigopiano – was shown on the screen. Two of the rescuers, a firefighter who had worked at the avalanche site and a member of Italy's Red Cross who had assisted in earthquake relief, shared their stories.

Italy's firefighters were recently crowned the best in the world at a competition known as the 'firefighting Oscars', where they were praised for their “exceptional teamwork” in the aftermath of a series of deadly quakes.

The first night of the Sanremo Music Festival – the inspiration for the Eurovision Song Contest – drew a 50 percent share of the TV audience, with over 11 million tuning in for the first night on Tuesday. The overall figure was slightly down on last year's opening night, but the audience share saw a slight increase.