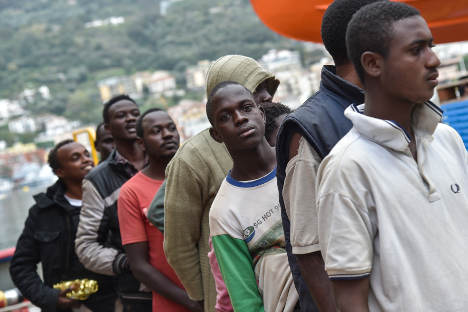 More than 500,000 migrants have entered Italy since 2014, and nearly 175,000 asylum seekers are waiting in reception centres. Photo: Andreas Solaro/AFP

But the plan also calls for fresh efforts to curb the influx, and to expel migrants whose asylum applications are rejected.

“We have to welcome and integrate those who have a right to stay, and send home the others,” interior minister Marco Minniti told a parliamentary commissions.

Asylum seekers will also be asked to earn their keep by working with little or no pay on civic projects, such as maintaining parks, giving language classes or helping the Red Cross.

The programme has already been tested over the past months in the northern town of Belluno, but in a country where youth unemployment is around 40 percent, many regional councils are bristling at the plan, saying they should be giving jobs to their own citizens.

Labour unions officials have said the project exploits the migrants, a concern echoed by refugee advocates.

For Roberto Zaccaria, president of the Italian Council for Refugees (CIR), volunteer work “constitutes part of the integration phase, along with Italian classes. But it shouldn't become a condition for obtaining asylum”.

Minniti, however, said “It's not about creating competition on the job market.”

READ ALSO: How Italy is getting asylum seekers to help out in their communities

The government plans to distribute migrants more evenly across the country, with a goal of 2.5 migrants to every 1,000 residents.

It will provide a total of €100 million ($107 million) to municipalities accepting to increase their share of migrants.

“Not every commune is going to participate right away, but it's a first step,” said Matteo Biffoni, head of immigration at the National Association of Italian Communes (ANCI).

The government also plans to close the biggest reception centres, “because smaller numbers allow for a different relation with locals”, Minniti said, adding that he would bolster security at the centres.

Some sites intended to house 300 people currently hold 1,000, and others have been declared unfit for habitation but are still being used, for lack of any alternative, said Gabriella Guido of the advocacy group LasciateCiEntrare (“Let Us In”).

But the new measures will go hand in hand with a new push to deport migrants who fail to qualify for asylum, and stronger border patrols.

Currently, reviews of asylum requests take six months on average, and about 40 percent of the requests are approved.

But for those who fail to qualify, an appeal process can take up to two years.

To speed up the process, a new legal authority will be created for refugees contesting a refusal of asylum.

New holding centres will also be built in each of Italy's 20 regions for refugees facing deportation, compared with three across the country now, with a total capacity of 1,600 people.

Italy will also renew repatriation deals with the migrants' countries of origin, and speed the process for countries with which it already has accords, including Tunisia, Egypt and Nigeria.

Last week, Italy reached a deal with Libya's UN-backed Government of National Accord to stem the migrant flows and human smuggling, which includes pledges of money, coastguard training and equipment for the North African country.

“We are aware that the challenge will be the implementation” of the accord, Minniti said.

“In Libya, the trafficking of human beings is a powerful criminal and economic force.”