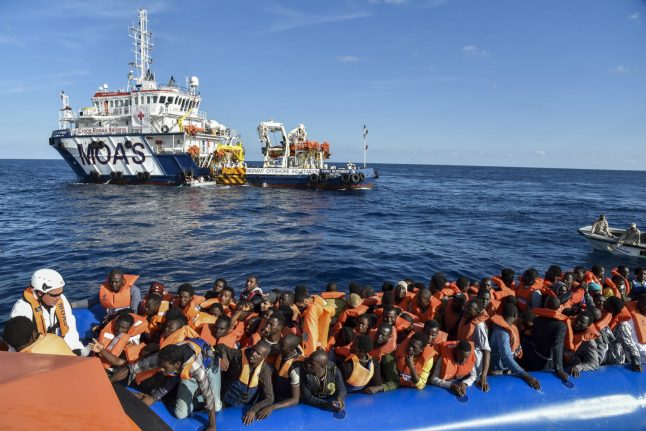 A rescue operation by the crew of the Topaz Responder, a rescue ship run by Maltese NGO "Moas" and the Italian Red Cross, in November 2016 off the Libyan coast. File photo: Andreas Solaro/AFP
This latest sign of Italy moving to a tougher approach to deter further migrant arrivals, was approved by decree at a cabinet meeting on Friday.
It comes into force immediately but has to be approved by parliament inside two months.
Around half a million migrants have arrived in Italy in the last three years, most of them Africans who were rescued from overcrowded boats in the Mediterranean after setting off from Libya on vessels operated by people smugglers.
Registered asylum requests rose from 23,620 in 2013 to 123,482 last year and the average time taken to study them has risen from 167 to 268 days.
“The complexity of the migratory phenomenon is also increasing with people arriving from very different countries,” Justice Minister Andrea Orlando said after the cabinet meeting.
“We are talking about life-defining decisions, we don't want to leave people in limbo,” he added.
The government is also recruiting 250 additional specialists to speed up the work of the commissions which carry out the first assessment of asylum requests.
Around 60 percent of those end with a decision to deny the applicant the right to remain in Italy.
The new courts will be designed to ensure people in this case have their appeals heard much quicker and that a binding decision is made at that stage.
As things stand, rejected asylum seekers can generally mount two appeals in a lengthy process that overturns the original denial in an estimated 70 percent of cases.
“These will be specialised judges with detailed knowledge of migration issues,” Orlando said, denying the abolition of a second appeal involved lowering standards of legal protection.
The UN refugee agency welcomed the strengthening of the asylum commissions but voiced reservations about the new courts.
“There will have to be a very thorough examination of individual cases. If it is impossible to appeal, the first hearing has to be as good as possible with the emphasis on quality rather than speed,” a spokeswoman said.
Orlando vowed the commissions would become more reliable and consistent in their decisions thanks to the new recruits and the recording of all discussions becoming compulsory.
Friday's initiative follows recent moves by the government to make it easier for migrants awaiting decisions on their fate to do voluntary work that will help them integrate into Italian society.
Italy has also recently agreed to help train Libya's coastguard to better police its coastal waters to reduce the number of boats leaving the country, and to help its former colony with the running of centres to house migrants pending their repatriation to their home countries.
On Friday, the government announced the creation of around 20 permanent repatriation centres capable of housing a total of 1,600 people pending deportation.