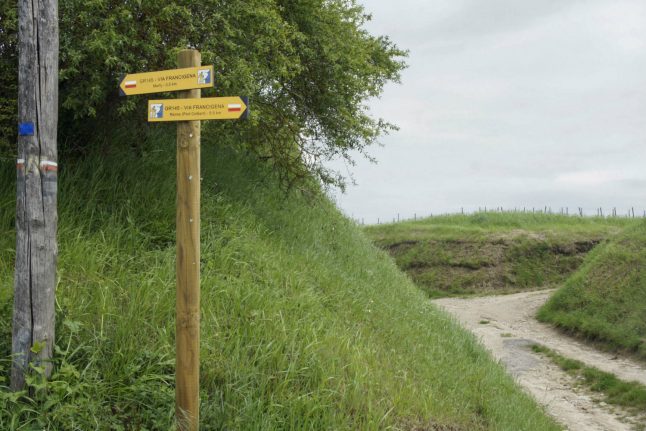 Photo: Garitan/Wikimedia Commons
Seven regions are backing the application to secure Unesco protection for the section of the famous hiking route that starts in the Alps and winds through plains and Tuscan olive groves before reaching the Italian capital.
The hope is the UN will recognise the “exceptional importance in terms of both culture and nature” of the path first made famous by Sigeric the Serious at the end of the 10th Century, the regions said as they announced their proposal Friday.
Sigeric, the bishop of Canterbury, described the 1,800-kilometre (1,100-mile) route in a 990 travel journal detailing his pilgrimage to Rome and 80 landmarks he visited along the way.
He would have run the risk of encountering wild animals and bandits.
Nowadays the Italian leg is underfunded and largely neglected and needs protecting “for present and future generations”, the regions said.
Sections of the way, which can be enjoyed on foot, horseback or bicycle, remain popular with pilgrims (some 30,000 walked it in 2014) and nature enthusiasts.
But with few places offering walker-friendly accommodation, it has lost out in recent years to the more popular Santiago de Compostela route in Spain.
“Italy does not have gold mines,” said Nicola Zingaretti, president of the Lazio region. “But it has an enormous heritage of hamlets, traditions, and wine and food.
“It's an immense wealth which the whole world envies and wants a part of,” he said, describing the route as “an opportunity for development”.