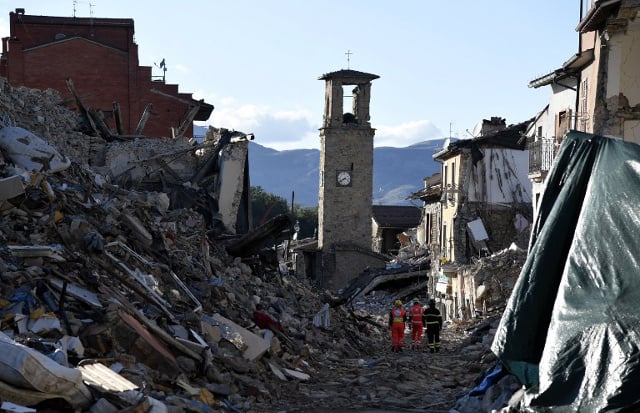 Destruction in Amatrice, one of the hardest hit towns. Photo: Tiziana Fabi/AFP

The agency's report has been sent to Brussels as part of Italy's request to tap the EU Solidarity Fund to help pay for recovery efforts.

The cost to repair artworks, monuments and other historic gems in the region, home to hundreds of medieval towns and villages, was set at three billion euros.

Italy had already sought EU aid in November, after a 6.0-magnitude quake hammered the mountain town of Amatrice in August, killing nearly 300 people.

But the damage at the time was estimated at just seven billion euros.

Since then, several powerful quakes have rocked the region, leaving thousands of people homeless for months at a time.

The tourism and agricultural industries which form the backbone of the region's economy have also been badly hit. Many hotels and agritourism sites located have been left unusable, while farms suffered damage and an estimated 10,000 animals were affected by the quakes, according to consumer organization Coldiretti.

In one deadly episode, four earthquakes hit central Italy on January 18th. About three hours later, an avalanche slammed into the Hotel Rigopiano, burying the structure in rock and snow and killing 29 people.

Rescuers worked 14-hour shifts over the next week to recover all bodies, pulling a total of 11 survivors to safety, including the four children who were inside the hotel at the time of the disaster.

AS IT HAPPENED: Rescuers race to pull survivors from avalanche rubble

Mayors of the devastated towns have spoken out to say they feel “abandoned” by the government, with dozens of residents from the central region protesting in Rome at the start of these year. Demonstrators carried banners with slogans such as 'Bureaucracy kills more than the earthquakes'.

One of the organizers told The Local at the time: “It will take at least ten years to be able to return to our homes, and we haven't even been able to empty our houses and recover our furniture, our memories of our lives and those of our ancestors.” The cost will also weigh on Rome's discussions with Brussels over Italy's 2017 budget targets.

The country says the quakes, along with the influx of migrants seeking to enter Europe, are exceptional events that should allow the country to ease up on deficit reduction targets.

The EU had wanted Italy to reduce its deficit to 1.8 percent of GDP, but Rome wanted to raise this to 2.3 percent.

But it appears the Italian government has agreed to find an additional 3.4 billion of savings, to bring the deficit to 2.1 percent of GDP.