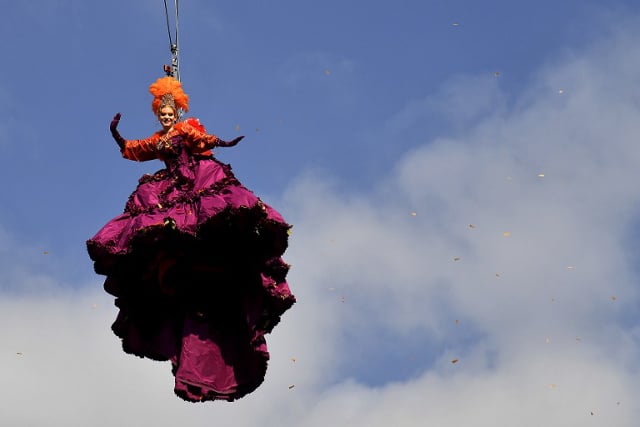 On the 12th chime of midday from St Mark's Campanile, Claudia Marchiori descended gracefully from the famous bell tower, attached to a wire 80 metres (260 feet) above the crowd that had gathered for one of the world's most famous carnivals. Dressed in a leviathan purple gown with orange wings, she sprinkled glitter and confetti to the tune of “Wicked Game”, the 1989 song by American rock musician Chris Isaak. The carnival will last until February 28th, with events taking place across Venice and the surrounding islands. Security was high at the event this year, which left some struggling to navigate the network of bridges and canals to the centre. “I imagine those tourists who did not know what to expect may have had some difficulties in reaching this magnificent point of the city,” Michele, an Italian visitor who was enjoying the show with his Latvian girlfriend, told AFP. The Venice carnival is thought to have started in 1162, when Venetians spontaneously gathered to celebrate a military victory in Saint Mark's Square. During the Renaissance it became an official festival, the masks allowing revellers to forget everyday worries and the city's rigidly hierarchical class system, and indulge for the carnival period. Abandoned for decades after it was outlawed under Austrian rule, it was resurrected in 1980 as part of a government effort to promote the region's culture and history. It is now one of the most famous carnival celebrations in the world, with around 3 million visitors flocking the canal-covered city each spring to watch or join in the festivities.