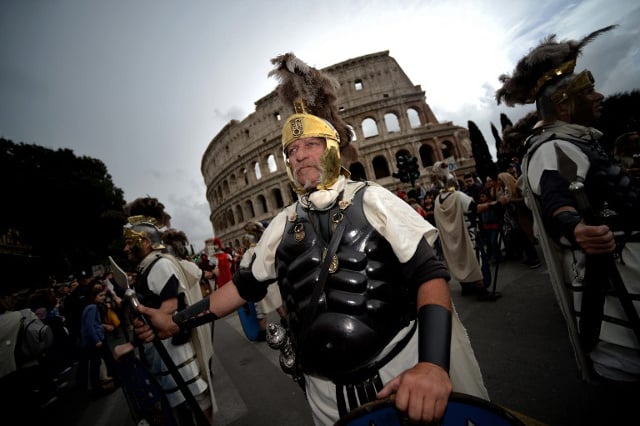 Police said on Monday morning that the men were stopped by officers in the Pincio neighbourhood, to the north-east of the historical centre. They were asking passersby for money in return for a group photo.

“They were fined €400 each and their costumes were confiscated,” police said.

Rome officers also confiscated a total of 7000 items from illegal street sellers over the weekend, with one such seller biting a police officer in retaliation, who then had to be treated in hospital. A photo with a costumed gladiator (which is what they call themselves most of the time, despite usually dressing as Roman centurions) may seem like harmless fun, but city authorities have sought to crack down on the practice after a string of complaints accusing the actors of overcharging or even pick-pocketing unsuspecting travellers.

The ban targets anyone portraying a historical subject – centurions are specifically singled out – in photographs or videos in return for cash. It has been in place since December, and was an update of a previous regulation introduced in winter 2015.

But the battle between Rome's centurions and local authorities has been going on for years; back in 2002, a law obligated costumed 'street actors' to pass an exam, including English language and a general culture test, before they could work in the capital.

Authorities said the fines were necessary in order to “protect public order” and safeguard the city's “cultural, artistic and monumental heritage”.

A viral video last summer showed a Romanian TV crew getting their wallets stolen by a group of Colosseum centurions who took €100 as compensation for a couple of photos in front of Rome's most iconic building.