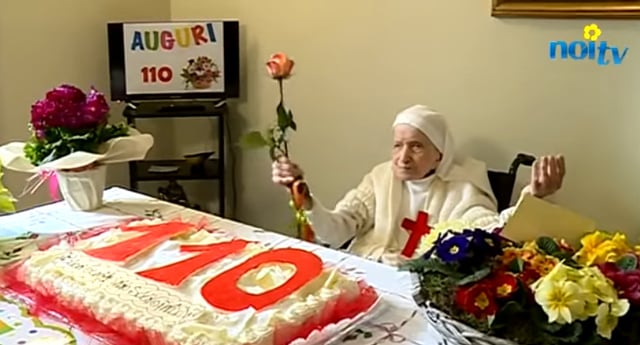 She was born in Verona, and first became a nun in 1931, joining the order Ministre degli infermi di San Camillo and working as a nurse in hospitals and care homes across the country.

In 2000, at the age of 93, the nun moved to the motherhouse of the convent, where she takes an active part in community life and is known for her lively and joyful attitude.

She celebrated the milestone of reaching 110 with other members of the order and the Bishop of Lucca, Italo Castellani, while Pope Francis sent his birthday wishes.

The pontiff “participated spiritually in the shared joy of the happy anniversary, sending deep congratulations and heartfelt wishes,” a blessing sent from the Vatican said. Sister Candida met the pope in 2014 on her 107th birthday, when she joined in a mass at Rome.

But what are her secrets to longevity?

“Take things as they come,” she told journalists gathered at the convent for the cake-cutting ceremony.

“Love, love, and keep on loving – with joy!” added Sister Candida, and offered a particular piece of advice to the younger generation. “Have faith in the future, and put in as much work as you can to make your wishes come true.”

The nun explained that her own wishes had been fulfilled by carrying out the work of the convent. “Throughout my life, I have always thought to myself: Where God puts me, that is the right place for me,” she explained.

Watch the video of her birthday celebrations below.

One nun in Italy is almost five years her senior: Sister Marie-Josephine Gaudette, who lives in a Rome convent. Gaudette was born in the USA but moved to Italy in the late 1950's, so while Bellotti can claim to be the oldest Italian nun, Gaudette is the oldest nun living in Italy.