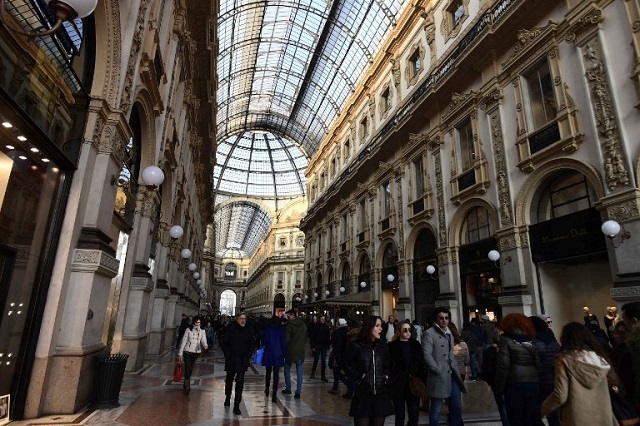 But beyond the blue skies the eternal city is battling crises on several fronts, while its northern rival has become the nerve centre of Italy, attracting not only record numbers of tourists but entrepreneurs and foreign capital.

“Milan is experiencing a moment of extraordinary transformation, becoming one of the most interesting hubs internationally,” says Giuliano Noci, a strategy professor at the Polytechnic School in Milan.

Visitors descend for fashion week four times a year; a design fair that takes over large parts of the city; a week-long food fair founded this year; and a book fair Milan is boldly stealing from its sister northern metropolis, Turin. With such an array of cultural offerings, the smog lingers but the city has shrugged off the stereotype of being a sad industrial hub.

“Milan was able to capitalize on the World Expo” of 2015, which attracted 21.5 million people, including 6.5 million foreigners, Noci said.

And despite welcoming a record number of visitors in 2015, the home of the famous Gothic cathedral and La Scala opera house topped it last year, with tourists up by over 2 percent.

“One of the highlights of Milan is that it is a cosmopolitan city, it attracts many quality foreigners, it's a centre of exchange. The universities are very international,” says Carlo Alberto Carnevale Maffe, a professor at the Bocconi University.

Noci describes it as “a gateway to business in Italy, linked to one of the most important economic development zones in Europe”. While the national jobless rate is close to 12 percent, it is only 8.0 percent in Milan, while in Rome it nears 11 percent.

A quarter of Italian banks have set up their headquarters here, and many companies have quit Rome for Milan, like television group Skytg24, which decided in January to close its headquarters in the Italian capital.

“Important multinationals, including Chinese ones, have decided to open research centres here, such as Huawei,” said Noci, referring to the Chinese telecoms giant.

You cannot move for famous 'Made in Italy' food, fashion and tech companies, and the Lombardy capital has the largest congress centre in Europe as well as three airports to Rome's two. And while the city of the Colosseum struggles with a waste problem, that of the stock exchange is one of the top three European cities for recycling.

The gulf between the two cities has become so pronounced that Roman philosopher Raffaele Simone was even driven to suggest in L'Espresso magazine in January that it might be time to move the capital to Milan.

“It is an ancient question… but for some time it has become increasingly impossible to avoid it,” he wrote, citing corruption scandals, Rome's huge mountain of debt and its beleaguered mayor Virginia Raggi as reasons to up sticks.

His complaints will have rung true with many: “cleanliness (years of neglect), urban policing (inefficient, boorish), maintenance of green spaces (zero), public transport (catastrophic), traffic (undisciplined to the point of malignancy)”.

Rome has “significant potential, but it must first solve basic problems such as transport. Only once it has done that can it think of a medium to long term project of strategic development,” Noci said.

Simone's suggestion tickles Carnevale Maffe. “Us Milanese have never been interested in being the capital of Italy,” he said.

“What Milan wants is to be the capital of the growth, innovation and economic development.”

He describes the city as “strongly European,” in the sense of a Europe “looking outwards to the world”.