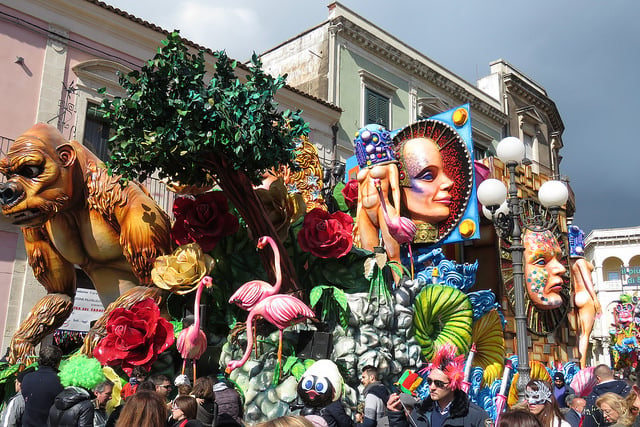 Across Italy, you're spoilt for choice when it comes to carnival celebrations, with plenty of towns and cities hosting events.

Venice's celebration may be the biggest and best known, but this is far from the only one worth a visit this carnival season.

Here's our pick of the best, wherever you are in Italy, each offering their own take on the spring tradition.

€5 million goes into making this festival happen each year, with huge colourful floats parading down the streets and broadcasts on Rai TV for those who can't make it to the event.

It started out in 1873 as a protest at the upper classes not having to pay taxes and has very much kept its political theme – expect to see papier mache caricatures of political figures atop the carnival floats. More information.

This festival is ideal for visitors with a sweet tooth, as spectators are showered with chocolates and candy from the floats. There are plenty of shows, children's activities, and street festivals to enjoy. This one started as a celebration for the reconciliation of two warring local families back in 1347, making it Italy's oldest carnival.

Sicily's best known carnival has its roots in an old tradition where locals would take to the streets to throw rotten eggs and fruit at each other. Not tempted? Don't worry, these days it's a much more respectable and beautiful affair, with ornately decorated floats, usually adorned with fancy flowers and lights. More information.

After something more exciting than your typical parade? Try Ivrea, where the highlight of the festivities is the annual orange fight – a rather messy way of commemorating the local people's struggle against Napoleonic troops (although it first started several centuries later.)

Revellers on foot represent the townspeople while those on carts play the part of the troops, all throwing oranges at each other. More information. This carnival, the second oldest in Italy which has been celebrated for over 600 years, is also the longest-running celebration of its kind in the country: it officially started back on Boxing Day.

Throughout the season, there are concerts, shows, and various parades. Don't miss the 'propaggini', a kind of poem battle where people take to the stage and improvise satirical rhymes.

Concerts, parades, plenty of food and drink and a grand ball make up the festivities at this Sicilian extravaganza, which has a friendly rivalry with Acireale.

It's thought to date back to Roman times, and the highlight is on the final day when the chariot of Peppe Napa, the Carnival King is burned in the town's main square.

The usually quiet town of Cento comes alive for carnival time – its festival is known as the 'Carnival of Europe' and is twinned with Rio de Janeiro's, to give you some idea of its prestige.

Watch out for flying objects – it's become a tradition to throw toys and other inflatable objects from the floats to onlookers, with prizes given for the most creative ideas. The end of the festival is celebrated with an unmissable fireworks show.

What makes Oristano's carnival stand out is the chance to witness the Sartiglia, a unique horse race where the costumed riders try to spear a hanging silver star, and perform acrobatics from the saddles of their horses. There are also the typical parades, shows and general merriment of carnival season, Sardinian style.

READ ALSO: Are these Italy's most beautiful villages?

This is an updated version of an article originally written in February 2017..