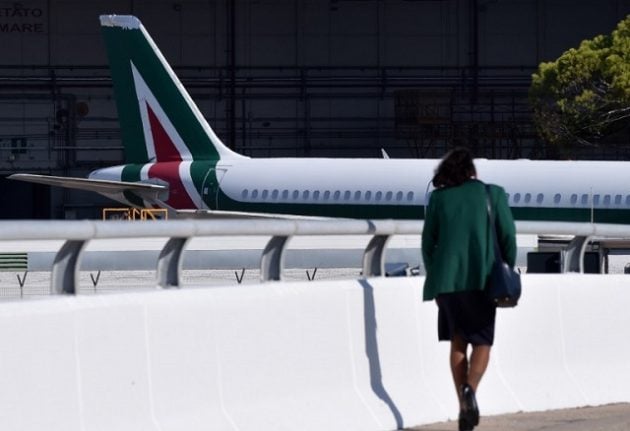 An Alitalia employee walks in front of a plane at Rome's airport. Photo: Alberto Lingria/AFP

Both domestic and international flights are affected by the 24-hour strike.

But “flights set to operate during the peak times between 7 am to 10 am and from 6 pm to 9 pm will operate as scheduled,” Alitalia said.

The airline also explained that larger aircraft would be used on these scheduled flights, in order to carry as many passengers as possible, and that additional staff would be at Rome Fiumicino and Milan Linate airports to help affected travellers.

A 24-hour strike has been coordinated by the USB and CUB Trasporti trade unions, together with the ANPAC and ANPAV professional associations, while another group of unions will carry out a four-hour strike between 2pm and 6pm.

Alitalia did not share a reason for the strike, but it comes as the airline is struggling to find a way to cut costs in order to compete against budget rivals. Executives will present a new business plan to government ministers by the end of February.

In January, chairman Luca Cordero di Montezemolo said that redundancies were possible, explaining: “We need a drastic and courageous plan.”

However, Economic Development minister Carlo Calenda said that management mistakes should not “fall on the shoulders of the employees”.

Calenda criticized Alitalia and its de facto owner Etihad for airing the possibility of redundancies without first outlining a strategy to get the long-struggling company back on track.

“The situation at Alitalia tells us that the company has been poorly managed,” the minister told Radio Anch'io. “It is a totally private company that has significant organizational problems.”

Information on flight times for Thursday and advice for obtaining refunds can be found on the airline's website.