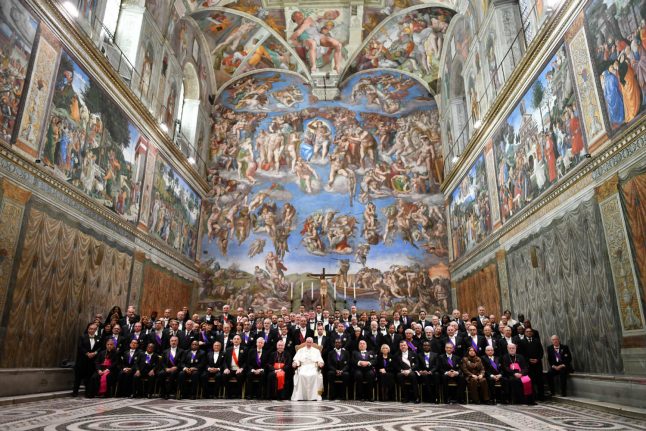 File photo: Alberto Pizzoli/AFP
By combining innovative digital technology and special LED lamps which aimed to reproduce daylight, photographers were able to make images measuring 43 centimetres (17 inches) tall by 1.2 metres (four feet) wide.
The work includes 220 life-sized images from the chapel, including elements of The Last Judgement as well as frescoes painted on the walls by Perugino and Botticelli.
The three works, of which 1,999 copies have been made and will be sent to the world's most important libraries, all give a perfect rendition of the colours used by the Renaissance masters, said Italian art publisher Scripta Maneant.
“The project took place over five years,” said the publisher's head of graphics Gianni Grandi as he unveiled the images inside the chapel late on Friday.
“The photographs let us understand Michelangelo's work, for example his use of striation or pointillism,” he said, referring to various painting techniques.
For mere mortals whose budget is unlikely to stretch to the 12,000 euros ($12,700) needed to buy the images, they can still visit the chapel itself which averages some 20,000 visitors per day.
The frescoes were given a new lease of life in 2014 when they were illuminated with a revolutionary new lighting system.
Url copied to clipboard!