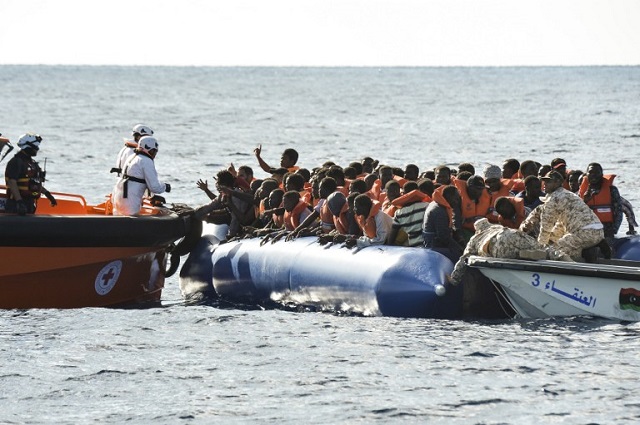 Migrants and refugees on a rubber boat during a rescue operation. Photo: Andreas Soldaro/AFP

European efforts to close the route are also thought to lie behind a 30 to 40 percent increase in the number of mainly African migrants who have landed at Italian ports in the first two months of this year, compared to the same period in 2015 and 2016.

More than 2,700 people have been rescued in recent days, including a newborn delivered on a Norwegian police vessel.

The latest arrivals will lift the total for January and February above 12,000.

The number of deaths has also spiked: survivor testimonies point to 350 so far this year, compared to around 100 in the same period of last year, according to the UN.

The dangers of winter crossings were underlined in February 2015 when four rubber dinghies packed with migrants were caught in a storm that was to claim some 330 lives, including many who who froze to death and 20 who perished in the course of a what rescuers described as a hellish salvage operation.

'Hit until you faint'

“The increase in arrivals is probably due to living conditions in Libya becoming ever more dangerous,” said Flavio Di Giacomo, spokesman for the International Organisation for Migration (IOM), one of the agencies that helps migrants on their arrival in Italy.

Sairon Kamara, one of the people rescued last week, described the brutality of the traffickers who organise the migrants' journeys.

“The people would beat us every day and hang us (upside down) with rope,” Kamara told an AFP reporter on board the Golfo Azzurro, a rescue boat operated by Spanish charity Proactiva Open Arms.

“It was not easy, every day people are dying. Every day, people die.”

Another Guinean, Bari Mamadu, described how the smugglers would force migrants to call their families to ask for more money.

“When you dial the number, they hit you so your parents will hear you screaming … there are five people hitting you with thick piping, hitting, hitting until you faint.”

Griselle, from Guinea-Bissau, said he had seen 15 people die from the blows, or as a result of being deprived of food and water.”Libya is hell,” he said. “They treat us like goods that can be bought and sold.”

Last week, the corpses of 13 Africans were found suffocated in a container they had been locked in for four days prior to a planned departure.

Not all those leaving Libya had come to the North African state with the firm intention of trying to travel on to Europe.

A group of 75 Bangladeshis rescued last week said they had worked in the country for four years before deciding it had become too unsafe to stay amid ongoing violence between warring factions.

At the same time, the traffickers are using European moves to block their trade as an enticement to persuade would-be migrants to book their passage as soon as possible.

Earlier this month, Italy and Libya signed an EU-backed memorandum of understanding under which Italy's coast guard will help train and equip its Libyan equivalent to make it more effective in stopping boats.

“The traffickers say it will be the Libyans doing the rescue operations in a couple of months and bringing everyone back to Libya,” said the IOM's Di Giacamo.

“That's the last thing most of the migrants want so they think they have to hurry up and leave.”