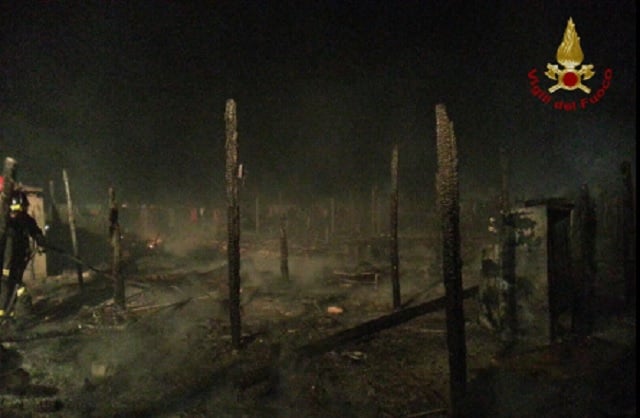 Within minutes, the fire engulfed the camp in San Severo, Apulia – which is known as the 'Big Ghetto' by locals and migrant residents.

Italy's fire service reported early on Friday morning that they had recovered “two charred bodies” from the wreckage.

The victims have not yet been identified, but are thought to be two men originally from Mali, according to local paper Foggia Today, which cited camp residents.

The camp, a shanty town of around 5,000 square metres, was made up mainly of makeshift huts built using cardboard, wood, and plastic.

It has been in place for 20 years and was home to hundreds of migrants, mainly of African origin and working in agriculture in the surrounding area.

Police had on Wednesday begun an eviction of the camp, following investigations which suggested criminal activity had infiltrated the camp. However, around 350 of the camp's residents had refused to leave, with around 200 protesting outside the Foggia prefecture on Thursday morning.

Regional president Michele Emiliano has described the 'Ghetto' as “a disgrace, which has grown out of years of indifference”.

At 7am, fire fighters said the blaze was “under control” but that it had spread quickly, destroying around 100 of the huts.

The fire broke out suddenly and spread quickly due to strong winds in the area, causing several gas tanks – which were used for heating and cooking in the camp – to explode. At the moment it is not clear if the cause of the blaze was accidental or deliberate.

Shortly before 10:30am, an update from the fire service confirmed that officers were securing the area and working to establish the cause of the fire.

Thursday night's fire was the seventh – and most serious – which has hit the camp since 2012.