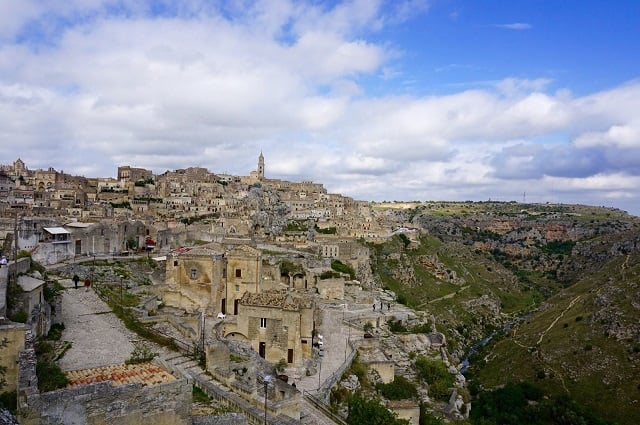 Let me introduce you to one of the most unusual, evocative, and haunting towns we have seen in 21 years of travel in this endlessly fascinating country. This is a place that can only be described as terrible in its beauty.

Matera, Basilicata is one of the dozens of UNESCO World Heritage sites in Italy, the capital of the Province of Matera and one of the two major towns in Basilicata.

The town is splayed out along the top of a plateau above the Bassento River Valley, and is scenic in its own right, with its Byzantine basilicas, its palazzi, and its medieval city scrambling up the side of a steep slope. The town shows signs of Roman occupation, and some think the name, originally Mateola, is a deformation of the name of the Roman consul Lucius Metellus. It was dominated in turn by Byzantines, Lombards, Normans, and a half dozen other overlords. But the part of the town which gives it its world heritage status is the Città Sotterranea, the subterranean city. The Gravina River has furrowed a deep ravine through the middle of the plateau before punching its way through the western side and debouching into the Bassento.

All along the edges of the ravine are caverns and grottoes in the limestone layers, which have provided habitation for humans since the Paleolithic era. These rock-cut dwellings are known simply as Sassi, ‘Stones’, but that hardly tells the full tale.

The Sassi of Matera housed a prehistoric troglodytic settlement thought to be among the first human settlements in all of Italy. A community of cave men, in other words. And the Sassi have been continuously inhabited, apparently for at least 35,000 years.

Many of the more modern houses are little more than caves as well, but others have been laboriously hewn from the limestone into proper walls, ceilings, floors, and rooms. In some areas, whole rock-cut streets and rows of dwellings can be visited. This area takes its name, “La Gravina,” from the river. We clambered up to a knob detached from the main range of stone, one used by the Lombards to build a castle, half rock-hewn and half masonry. On one side of the crag is the Chiesa di San Pietro Caveoso, one of no fewer than seven so-called rupestrian churches in the town – that is, churches wholly contained in or carved into a cavern.

These churches are a common feature of Paleo-Christianity in Basilicata, Puglia, and our Cilentan part of Campania. For example, the cavern at Olevano sul Tusciano, about 30 km north of here, has no fewer than four little chapels, not excavated into, but constructed within, this huge cavern, complete with walls and even roofs! San Pietro is almost totally natural, which for me adds to its evocative atmosphere, and on several plastered walls are the scant remains of once-beautiful Byzantine frescoes.

We ambled down one of the main streets in La Gravina, ascending and descending stairways as the lanes zigged and zagged their way along the side of the cliff. Many of the chambers were long since abandoned, sad reminders of an even sadder past, but many have been refurbished as shops and art studios. One large dwelling has been refurnished as a tourist site, one which we thoroughly enjoyed. You enter a large living area, walls squared out and plastered so that, except for the absence of windows, you might well imagine yourself in a stone-built cottage. At the far end is a sleeping area.

Entering a second chamber, you find the bed of the children and, to one side, a simple kitchen with open hearth and a crude flue vented to the outside.

Passing through the living area, you enter the stables where the livestock was housed in winter and agricultural implements stored.

Descending a long flight of rock-cut stairs, you enter the cantina, with a pedestal to the south for ranges of the huge terra cotta ziri in which were stored wine and olive oil. On the right is another pedestal, but this one constituting the treading vat and press bed for making the wine and oil to be stored in the ziri.

We retraced our steps and entered to the north the household pantry, where other foodstuffs would have been stored. No sign of a latrine or running water. Waste disposal will have been in chamber pots and then the old heave-ho, and waste will have washed slowly down the slope into the river, Meanwhile, water was laboriously brought from that same river, some 1 1/2 kilometers down a simple footpath. Electricity, even in the middle of the twentieth century, was a distant dream.

In fact, when Carlo Levi wrote his famous book, Christ Stopped at Eboli, detailing the desperately poor, superstition-riddled lives of backward peasants in the Basilicata, he used La Gravina as inspiration for his fictional town. And it’s hard not to feel the disconcerting echoes of human suffering that the site evokes.

In the 1950s, remaining inhabitants were forcibly removed by the State to more modern buildings farther up the slope, and the town gradually began to grow upwards along the slope and the old town abandoned. But in the late 1980s, tourism began to take off in the region, and today there are B&Bs, hotels, wine bars, and dozens of vacation homes in La Gravina, and more and more people are digging out the old deeds and either selling or developing the old dwellings.

From beneath the ridge, looking up and along the ravine and shielding your eyes from the modern part of the city above, you can easily imagine you are looking at a primitive village from Biblical times if not before, and numerous Biblical films have in fact been made here, most famously Mel Gibson’s “Passion of the Christ.”

That story of human ignorance, cruelty and misery, and the distant hope of redemption, perfectly embodies the undeniable fascination of this haunted landscape.

This blog post first appeared on Dave and Sandy's Excellent Adventure, a blog by Dave Thurmond. He and his wife Sandy have  in the Cilento for six summers while researching and writing books on ancient foodways, including From Vines to Wines in Classical Rome.

Want to write a guest blog or opinion piece for The Local Italy? Get in touch at [email protected]