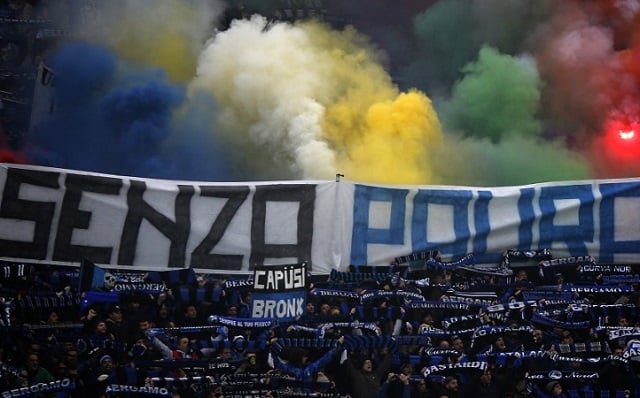 Atalanta supporters cheer on their team with a banner reading 'No Fear'. Photo: Marco Bertorello/AFP

Atalanta are enjoying their best season to date in Italy's top flight, sitting in fifth place only four points off the league's third and last Champions League qualifying spot.

But the Bergamo club's reputation for boasting one of the most fervent match day supports in Italy has been dented amid charges of trafficking and drug-fuelled violence by dozens of supporters, including a 73-year-old and a 63-year-old.

An investigation was launched in September 2015, in which police used hidden cameras around the stadium and the city and intercepted “hundreds” of telephone calls between suspects before launching a raid codenamed 'Mai Una Gioia' (Never a Joy).

A joint raid by Italy's Polizia di Stato (National Police) and Bergamo police on Tuesday morning uncovered large quantities of drugs at several addresses, leading to the arrest of 18 fans from a total of 26 questioned, according to statements.

“During the course of the investigation, hundreds of hours of intercepted calls and hidden camera footage have helped document dozens of cash exchanges, the violent robbery of a drug courier and several extortion attempts on drug users unable to pay their debts,” said a statement by the Italian National Police.

It was accompanied by photos of the drugs uncovered during the raid, posted on the Polizia di Stato Twitter account with a statement which said: “Seized by Bergamo police during the #Maiunagioia operation, leading to 18 arrests, eight precautionary measures and 30 stadium bans.”

The police statement said fans used secret language to buy and sell drugs, mainly cocaine and marijuana, in and around the stadium, after which “acts of violence” often followed.

Police had to intervene in the centre of Bergamo last January following violent clashes between 'ultra' fans from Inter Milan and Atalanta.