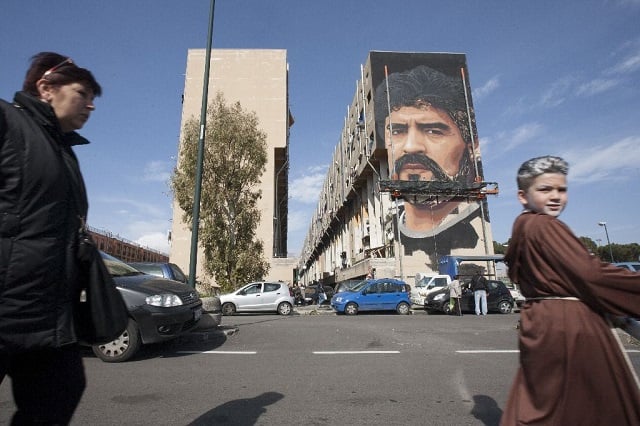 Painted by artist Jorit Agoch, the giant, head-and-shoulders depiction of a middle-aged Maradona with grey-flecked hair and beard adorns the side of a building in San Giovanni Teduccio, a tough neighbourhood known locally as “The Bronx”.

Maradona was already the subject of a famous mural in the city's Spanish Quarter, which portrays him dribbling with ball at his feet in a manner reminiscent of when he was in his prime.

That one was restored last year and there are discussions underway about making Maradona an honorary citizen of Naples to mark the May anniversary of the clinching of the 1987 title – a groundbreaking triumph that was repeated, again under Maradona's leadership, in 1990.

Passing in front of the new mural on Tuesday, hours before Napoli's Champions League clash with Real Madrid, retired sailor Giuseppe said Maradona was still revered “like a saint” in the city – despite voicing reservations about the star's run-ins with the Italian tax authorities.

“In my opinion he was the the greatest player of all time – better even than Pele,” he told AFPTV.

“The one thing that's sure is that when he was here, Napoli won a lot, although I don't agree him not paying his taxes when I have to pay them on my pension.”

Maradona recently visited the city for the first time in four years and he gave the team a pep-talk before their 3-1 first leg defeat by Real in the Champions League last-16 tie.

He was not expected to be at Wednesday's return leg but another local, diehard fan Mario, said the player would always be with the club in spirit.

“I was 16 when he arrived in Naples in 1984. I followed him to every ground in Italy and I am still a Napoli ultra. For me, no-one can take his place.”

The Maradona-era triumphs of Napoli over the much wealthier, trophied clubs of Turin and Milan had a resonance beyond football.

It was about an underdog having his day, the proud but impoverished south hitting back at the snooty north under the irrepressible leadership of a genial little general who embodied the urchin spirit of the sprawling port city's poorer neighbourhoods.

Maradona played the best football of his career at Napoli. It was during his 1984-91 spell at the club that he led an otherwise unexceptional Argentina squad to glory in the 1986 World Cup in Mexico.

These days however not everyone is convinced a city plagued by the drugs turf wars of organized crime should necessary play up the association with Maradona.

His Napoli career ended in a 15-month ban for cocaine use and was also tainted by a subsequent conviction for not paying millions of euros of taxes while at the club and by reports of links to members of the local mafia, the Camorra.

The honorary citizenship motion was voted down by the local council on Monday, although it is expected to be tabled again and approved in time for the May anniversary.

The new mural however seems to have won unanimous approval. Local community activist Luisa Sannino told La Repubblica: “Perhaps now it will become the neighbourhood with the Maradona painting, rather than one called the Bronx.”

By Giovanni Grezzi with Angus MacKinnon