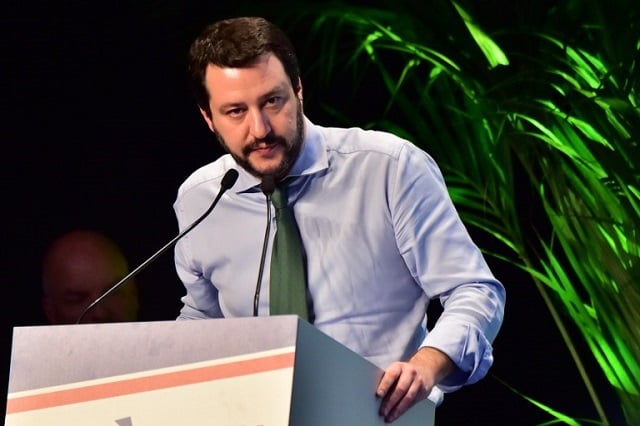 The visit, which wasn't publicized beforehand, represents the latest in a series of links between the Kremlin and Europe's populist parties, ahead of elections this year in Germany, France and the Netherlands.

Italy is heading for elections of its own, though prime minister Paolo Gentiloni has said these will not be called early, and will happen in spring 2018.

While the text of Monday's deal has not been made public, in an interview with Il Populista newspaper, Salvini outlined what he described as a 35-minute talk with Russian Foreign Minister Sergey Lavrov.

Salvini said: “We compared notes on major international policy issues, threats to the security of our countries, and on the prospects of Europe”, adding that the Russian minister “agreed with his analysis” of the state of the EU.

The Northern League leader said he and Lavrov “smiled together” about the “incredible anti-Russia propaganda campaign we are now seeing”, in reference to claims that Russian hackers influenced the US elections.

An editorial in La Stampa said the visit was particularly notable because Russian foreign minister Sergey Lavrov hasn't met his Italian counterpart, Angelino Alfano, and rarely receives foreign politicians who do not have a post in government.

“Historic agreement this morning in Moscow between the League and Putin's United Russia, represented by the foreign affairs committee member Sergei Zheleznyak. Fight illegal immigration and pacification of Libya, fight Islamic terrorism and end sanctions against Russia, which have cost Italy five billion euros and thousands of lost jobs. After Renzi's chit chat, the League's concreteness.”

“The Northern League's friendships are growing across the world; we're no longer alone. Come on, we can do it!” Salvini said on his Facebook page, sharing an article documenting his visit.

Salvini has spoken positively about Russia for years and has travelled to Moscow on multiple occasions, meeting Vladimir Putin in 2014.

A prolific social media user, he regularly shares pro-Russia posts on his Facebook page, particularly calling for an end to sanctions against Russia, which he labelled “absurd and paradoxical”.

When former PM Matteo Renzi's proposed reforms were defeated in a December referendum, Salvini was quick to claim the victory for his own – and to link the 'No' win to a global rise in populism. He sent out a series of tweets celebrating the result, including one which read: “Long live Trump, long live Putin, long live Le Pen and long live the Northern League!”

READ ALSO: 'Those who play war with Putin are idiots', says Salvini