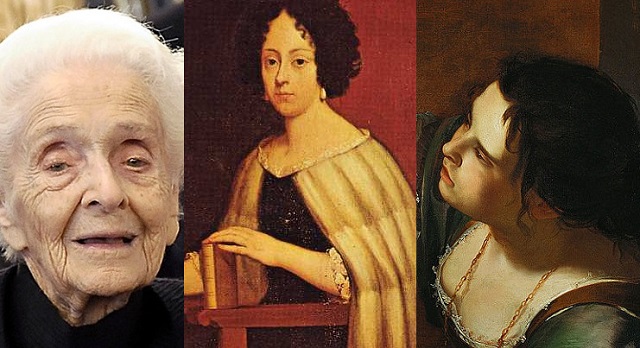 In the 11th and early 12th century, Trota worked as a doctor in the coastal city of Salerno. She is generally considered to have been the world's first gynaecologist and thought to have been the first female professor at the city's renowned medical school. Though we don't know much about her life, she produced a series of important medical writings which have survived.

One of her key works was De curis mulierum (On Treatments for Women), which was one of the earliest and most comprehensive pieces of work about women's medicine, dealing with contraception, menstruation, childbirth and more.

The manual was widely read and shared, translated into most European languages from the original Latin, though between the 16th and 20th centuries it was largely forgotten. Some of her theories are now known to be false, but other parts were surprisingly advanced for the time. For example, while the medieval church thought it was God's will for women to suffer in childbirth, Trota recommended they be given opium to help with the pain.

In addition to her pioneering work in women's medicine, she also had advice on treating a wide range of afflictions, from snake bites to bad breath. Artemisia Gentileschi, a Baroque painter who focussed on the female experience

Art was another field which was typically closed off to women in the 17th century, but Artemisia Gentileschi managed to achieve acclaim as a prominent artist of the period, and is celebrated for the progressive and experimental nature of her painting. Women are at the centre of most of Gentileschi's paintings, which often depict scenes of revenge or violence towards men.

Her father was also a painter and taught Gentileschi the tricks of the trade in his artist's workshop – her talent led many people at the time to suspect he had helped with some of her work, and led to her being underestimated as an artist in her own right. In the following centuries, she continued to be neglected, but interest in her work has surged over the past few decades.

READ ALSO: Ancient graffiti give an insight into groups marginalized by history books

While she was alive, Gentileschi's work was overshadowed by her involvement in a high-profile rape trial. Her private art tutor raped her when she was 18, and some months later the rapist backed out of his promise to marry her – which, at the time, would have been seen as publicly restoring Gentileschi's 'lost dignity'. Her father prosecuted the rapist, and the trial – during which Gentileschi underwent invasive gynaecological exams and thumbscrew torture – has influenced the interpretation of her work.

But she went on to achieve considerable success, becoming the first woman to be accepted into Florence's prestigious Accademia delle Arti, and working as a court painter across Italy, Spain, and even at the court of Charles I of England. Gentileschi is thought to have died in the Naples plague of 1656. Elena Cornaro Piscopia, the world's first women to get a university degree

Every woman who's studied at university owes something to Piscopia. The Venetian noblewoman became the first woman in the world to get an academic university degree, with her PhD in philosophy.

Her philosophy tutor, impressed by her aptitude, had at first tried to persuade the University of Padua to give Piscopia a degree in theology – but they refused, because she was a woman and theology was seen as a uniquely male domain. As a compromise, she was allowed to study for a philosophy degree and graduated in 1678, after a ceremony in which she explained some of the most difficult passages of Aristotle – all in Classical Latin, of course.

OPINION: 'Why women need to keep marching in Italy'

Not content with academic success alone, Piscopia was also an accomplished musician who mastered the harpsichord, harp and violin, and composed songs in her spare time. And her nickname was Oraculum Septilingue (the septilingual oracle) because she was fluent in seven languages: Italian, Latin, Greek, Hebrew, French, Spanish, and Arabic. Levi-Montalcini was the joint recipient of a Nobel Prize for her work on neurology. Not only that, but she became the first Nobel Laureate to reach the age of 100.

While she had a long and successful career, her life could easily have taken a different path. When she first expressed a desire to go to medical school – after a family friend had died of cancer – Levi-Montalcini's father disapproved, preferring that his daughters follow a traditional path of marriage and motherhood. And shortly after she began work as a neurologist, fascist dictator Benito Mussolini passed Italy's Racial Laws, meaning that as a Jew, Levi-Montalcini could no longer work in academia.

That didn't deter her though, and the scientist spent the war years setting up a laboratory in her bedroom and studying chicken embryos, even continuing her work after Germany invaded Italy and her family fled their native Turin. And that's not all: she also volunteered as a medic, treating war refugees.

Once the war was over, she continued her work between St Louis, Missouri, and Rome, and made her Nobel Prize-winning discovery of nerve growth factor. Levi-Montalcini received numerous awards and accolades throughout her life, even being appointed a Senator for Life in 2001. She died, aged 103, in 2012. Despite only being 13 when the Second World War broke out, Tina Anselmi played an active part in the underground resistance, persuaded to join after her school took her class to a public hanging of young partisans. She would later write about her experiences in the resistance in a series of books aimed at children and young adults.

After the war, Anselmi studied literature and became a primary school teacher, while also taking on active roles in the Christian Democracy Party and the primary teachers' union.

She became an MP for Venice-Treviso in 1968 and went on to be re-elected five times, before becoming Italy's first female cabinet member in 1976, serving first as Minister for Labour and then as Minister for Health. Anselmi was a fervent supporter of equal rights legislation, passing a bill which recognized fathers as primary caregivers, supporting laws on equal pay, and chairing the National Equal Opportunities Commission for years.

Anselmi became the first living person to be commemorated on a postage stamp in October last year; she died just days later at the age of 89. Franca Viola, the rape survivor who campaigned for a change in the law

Franca Viola became known as a symbol for female emancipation in post-war Italy, when she appealed to prosecute her rapist. Remember how Artemisia Gentileschi was encouraged to marry her rapist as a form of 'redemption'? Sadly, not much had changed in Italian law in that respect: rape was still considered as a crime against 'public morality' rather than against the victim, according to Italy's criminal code, and the article which said that rapists could be acquitted if they married their victims wasn't scrapped until 1981.

Back to Viola. She grew up in a small town in Sicily, where she attracted the attention of a local mafioso. Despite her rebuffing his advances, in 1965 the man – together with a group of friends – kidnapped 18-year-old Viola and her young brother, and repeatedly raped her. After she was released, thanks to a covert operation her father coordinated with local police, the rapist offered Viola a so-called 'marriage of rehabilitation'. She refused, an action which went against perceived moral codes so that her father received death threats and the entire family were threatened, even having their vineyard and cottage burned to the ground.

Viola and her family appealed the law and pushed for the rapist to be prosecuted. It was a landmark trial in which they were eventually successful, with the perpetrator jailed for 11 years, paving the way for changes in Italian law and the way society viewed sufferers of rape and domestic violence. However, she has refused to accept her status as a feminist icon, instead saying she simply did what she felt she had to, and listened to her heart.

She still lives in the same village with her husband, and has two sons, and exactly two years ago today, she was awarded Italy's highest honour, the Order of Merit, as a mark of recognition for her role in improving the status of women in Italy.