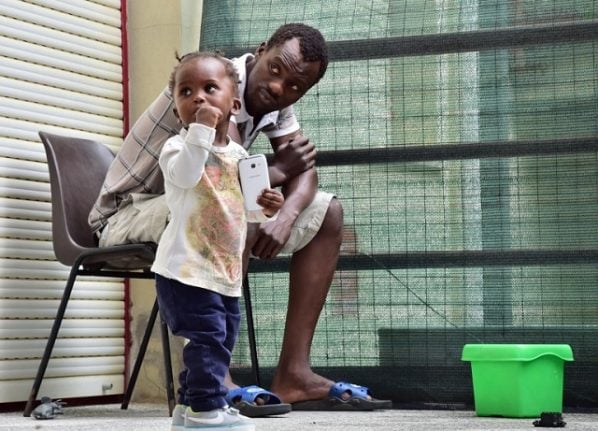 A man and young girl in a centre for refugees. Photo: Giuseppe Cacace/AFP

The report, which was published on Wednesday, singled out child migrants as particularly vulnerable.

Ambassador Tomáš Boček, the Council's Special Representative on migration and refugees, compiled the report after an October visit to some of the Italian regions which have shouldered the burden of the influx of migrants: Como, Sicily, and Rome.

Many of the children who arrive in Italy alone are slipping through the gaps, the report warned, due to an inadequate guardianship system, poor conditions in migrant centres, and procedural delays.

The 'hotspots' which are intended to be the first port of call for newly-arrived migrants were criticized as “unfit to provide children's needs”.

Despite the fact that the maximum period of time spent in these hotspots is supposed to be 72 hours, Boček said he had met youngsters in Lampedusa who had been housed there “in limbo” for over two months.

These delays led to overcrowded accommodation and poor sanitary conditions.

“In Lampedusa I also saw blocked toilets, with water leaking into the neighbouring bedroom which accommodated young girls, and the female showers were in a poor condition,” the Special Representative recalled.

Other problems raised were that children regularly received “biscuits and cigarettes” in lieu of their €2.50 pocket money, and missed out on education while staying at the hotspots.

And some centres failed to properly separate accommodation for adults and children, and men and women, potentially putting children at risk, the report noted. When children arrive in Italy without a parent or carer, the local mayor is generally appointed their guardian, but in areas which have seen high numbers of arrivals, this leaves mayors or their staff members responsible for over 1,000 children and therefore unable to provide proper care.

What's more, delays in appointing guardians, sometimes stretching over several months, created what Boček termed a “vacuum” in their care, potentially leaving them vulnerable to falling into the hands of smugglers.

The report urged Italy to implement “updated, universal standards” and regular monitoring for its migrant centres, both to ensure improvements in conditions and to minimize the risk of corruption at management level.

It also called on Italy to speed up the process of asylum decisions, relocation, and deportations – something Interior Minister Marco Minniti recently vowed to do.

Delays and weaknesses in these procedures not only put the centres under undue pressure, but may encourage further illegal migration, Boček warned.

Prime Minister Paolo Gentiloni appeared to respond indirectly to the report, saying in the Italian Senate that EU resources were critical in helping Italy deal with the migrant crisis.

“Not even Merlin the wizard could solve the problems of immigration,” the premier said. “But it is possible to replace illegal and deadly migrant routes with more acceptable flows and channels.

He called on EU member states to do their part in resolving the crisis, saying: “I hope that Brussels will take steps to help the work in Italy.”