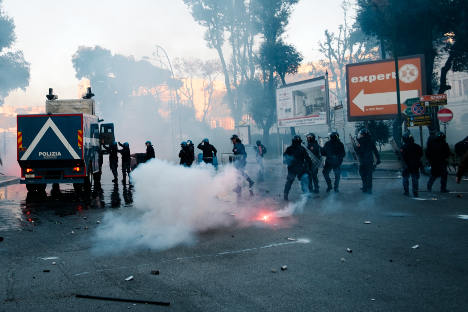 Police made three arrests and were looking for three other people reported to have been involved. Photo: Eliano Imperato/AFP

“Something very significant happened yesterday which we have to reflect on,” Interior Minister Marco Minniti said after the violence between masked protesters and riot police erupted on the margins of an otherwise peaceful demonstration in the sprawling port city on Saturday.

“In a democracy it is fundamental that everyone has the right to speak and it is even more fundamental for those whose views are furthest away from our own,” Minniti said.

Saturday's violence came after a handful of demonstrators broke away from a protest march.

They began hurling stones, flares, smoke bombs and Molotov cocktails at the police, who replied with baton-and-shield charges and tear gas.

The confrontation continued for over an hour, during which cars and rubbish carts were vandaliZed or overturned.

Police made three arrests and were looking for three other people reported to have been involved.

Salvini, an anti-immigration, anti-euro populist who attracts protests whenever he ventures out of his base in Italy's wealthy north, accused de Magistris of trying to censor him and threatened to file a legal complaint for defamation.

In the run-up to Saturday's clashes, the independent left-winger had branded Salvini a fascist xenophobe with contempt for southern Italy.

He also tried to use his mayoral powers to deny the far-right leader a venue for his first rally in Naples.

He was overruled by the local prefect, acting on the orders of the interior ministry.

“De Magistris should resign instead of accusing me of being a Nazi-fascist,” Salvini said on Sunday.

“Nothing like this has ever been seen in Naples and the worst thing about it is the mayor's support for it.”

“Handing Salvini the stamp of being the defender of free speech and the right of political leaders to voice their opinions was, frankly, an unthinkable short-circuit,” Francesco Casavola, a former president of Italy's Constitutional Court, told La Repubblica.

Renzi accused the Naples mayor of flirting with the violent fringe of left wing politics.

De Magistris, who had voiced support for the anti-Salvini protesters earlier in the week, rejected the charges as “lies”.

“I have never supported violence but I do stand with the people of this city who have been betrayed by powers who have blood on their hands.”

He refused to retract his attacks on Salvini. “We didn't try to stop him speaking but we did not want him in any city building because his politics are offensive to this city, racist ad xenophobic.”