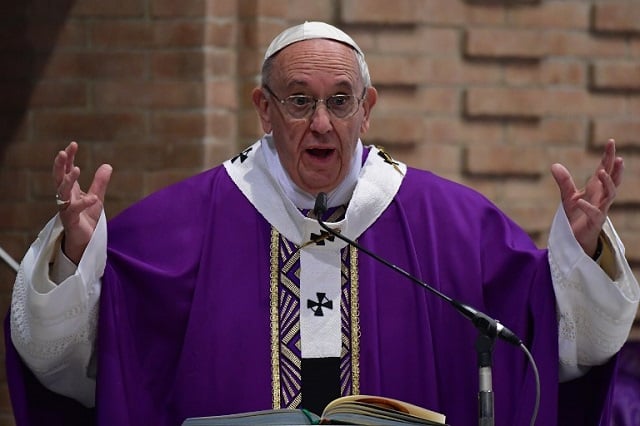 As he celebrates his fourth anniversary at the head of the Catholic Church on Monday, the affable Argentine continues to bask in a remarkable level of popularity around the world thanks to his popular touch, plain speaking and his humble, modest style.

But inside the Vatican Curia there is not always the same enthusiasm for a pope who has regularly lambasted the administration that runs the global church.

Addressing senior officials in December, the 80-year-old pontiff warned them the reform process he launched in 2013 had to lead to more than a cosmetic “face-lift” to remove wrinkles.

“Dear brothers, it's not the wrinkles in the church that you should fear, but the stains!” he told a group of religious bureaucrats he had previously described as suffering from “spiritual Alzheimer's”.

One Argentine bishop estimates active supporters of Francis's agenda to make up only around 20 percent of the Curia. A majority are loyal but passive and there is a significant minority actively opposed to him, the cleric says.

Adding to Francis's problems is the fact that rapid change has been anything but a feature of Church culture over the centuries.

The sensitive issue of clerical sex crimes illustrated this double difficulty last week when Irish abuse survivor Marie Collins resigned from the pope's advisory panel on the issue blaming “shameful” obstruction from within the Curia.

But some Vatican insiders say depictions of a kind of civil war in the upper echelons of the Church are wide of the mark.

“We need to get rid of this cliched idea of a reforming pope on one side and a group trying to block him on the other,” said German cardinal Gerhard Ludwig Muller, the head of the department targeted by Collins' criticism.

“This simplistic idea of a good pope and a wicked Curia is dangerous for the pontiff because it can leave him isolated,” said Gianni Valente, of the specialist review Vatican Insider.

And it does not always reflect reality. Many Vatican officials say certain reforms are held up because of a lack of sufficient preparatory consultation or because the wrong people are put in charge of them.

The most flagrant example of this was the appointment to a financial reform panel of Francesca Chaouqui, a PR consultant with questionable qualifications for the role.

Chaouqui was convicted last year of leaking classified documents to journalists at the end of a highly embarrassing trial dubbed Vatileaks II.

The case centred on an unsuccessful attempt to prosecute two investigative journalists for using the leaked documents to expose waste and mismanagement of Vatican finances and the taste of some cardinals for lavish luxury.

Better controls on money coming in and going out are at the heart of Francis's reform agenda but officials admit it will be several years before fully audited consolidated accounts are produced.

“It is not easy to introduce common accounting standards when you have not had them for centuries,” confides one official.

A month after his election, Francis appointed eight (now nine) cardinals to an advisory committee on administrative reform, but details of progress on this are sketchy.

At the beginning of 2014 a powerful economic department was created under Australian cardinal George Pell.

The move created shockwaves at the time but his powers have been trimmed since, according to Vatican watchers.

The body that manages the Vatican's huge assets has resumed control of its own affairs, noted Sandro Magister, a conservative commentator who is critical of Francis's leadership.

On the other hand, Vatican media activities have been completely reorganized and shaken up, despite considerable internal reservations.

The pope starts procedures and sows disorder,” says Magister, who describes Francis as being far from delivering the kind of change that was much discussed at the time of the conclave of cardinals which elected him.

Valente is more forgiving. “It is a long-distance job and the pope is laying out guidelines,” he says, while stressing that most believers will judge Francis's performance as pope on other, less institutional, issues.