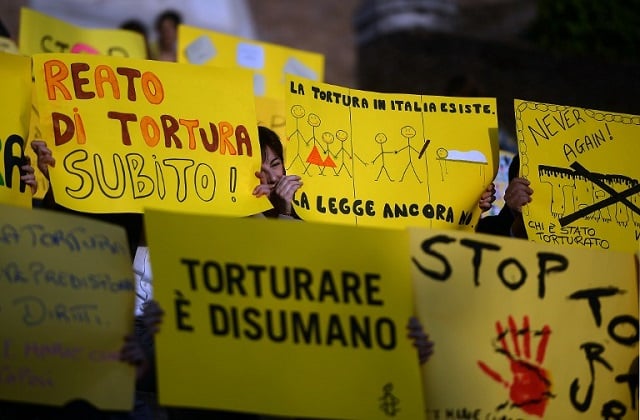 The council's committee of ministers said that Italy had not taken sufficient measures to comply with an April 2015 European Court of Human Rights ruling.

That ruling said police had committed “acts of torture” against a protester at the G8 summit in Genoa in 2001. At the time, Amnesty International called the incident the worst violation of human rights in a western country “since the Second World War”.

At the meeting over the weekend, the Council of Europe noted that “the Italian legal system is not yet equipped with criminal law provisions capable of leading to appropriate penalties being imposed on those responsible for acts of torture or other forms of ill treatment”.

Rights groups have long campaigned for Italy to make torture a crime, but the law has repeatedly been delayed in the Italian parliament and Senate.

The council urged Italy to “finalize without further delay” the bill which is currently pending.

“It is scandalous that Italy is obstructing all the international bodies,” Patrizio Gonnella, head of prisoners' rights organization Antigone, said on Monday. “It's scandalous that it doesn't recognize torture, a crime against humanity, as a crime, and that it ensures impunity for native and foreign torturers.”

Gonnella added that Italy's “international credibility is threatened” by the delays in passing the law.

The 2015 ruling was based on a suit filed by Arnaldo Cestaro, who was 62 years old at the time, and was bedding down for the night in the school along with dozens of other anti-globalization protesters when the raid began.

Dozens of activists and journalists were left injured in the raid.

The ECHR said in Cestaro's case there were “acts of torture sustained by the applicant” and found “the Italian criminal legislation… was inadequate for the punishment of such acts and not an effective deterrent against their repetition.” A rally in Genoa in 2007 in support of those who stood trial for suspected violence during the 2001 G8 summit in the city. Photo: Andrea Solaro/AFP