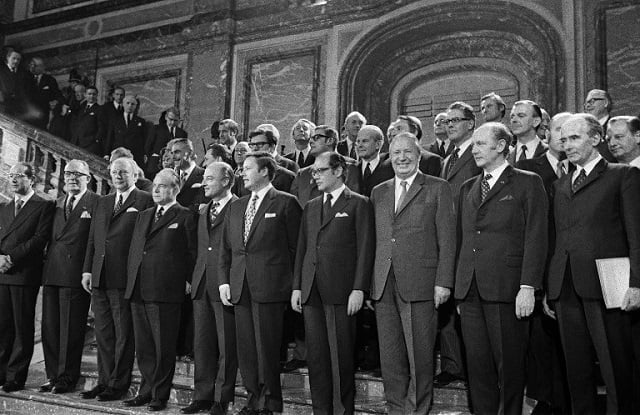 A group picture at the signing of the Treaty of Rome: AFP

The remarkable footnote to proceedings on what was a landmark day in European history was recalled by veteran British correspondent David Willey in an interview with AFPTV, ahead of Saturday's 60th anniversary of the treaty.

Willey, at the time a 24-year-old rookie reporter, was sent by the Reuters news agency to cover an event in which the British press had little interest.

“I was a junior in the office… they didn't consider it an important story,” remembers the now-retired Willey, who went on to be the Rome and Vatican correspondent for the BBC for 35 years.

The treaty that created what was then called the European Economic Community (EEC) was signed on March 25, 1957, by Belgium, France, Italy, Luxembourg, The Netherlands and West Germany.

Britain, which had nothing to do with this treaty nor the accord signed the same day to create the European Atomic Energy Community, had little to say on the matter.

“The Times gave one third of a column on page eight,” Willey said.

But perhaps the British press was right not to pay too much attention to the signing of what turned out to be empty pages.

Albert Breuer, one of the organizers of the signing ceremony, says the same in comments on the EU website: “All we could print in time were the first and last pages of the two thick volumes. Between them, there was nothing but empty pages.”

He says the blame lay not with the Italian printers but with the Swiss authorities, who delayed the train that was bringing the documents to Rome, and with the cleaners at the Rome building where the experts were working, who mistook the draft volumes for rubbish and threw them out.

The treaty was signed in the Horatii and Curiatii hall of the Palazzo dei Conservatori, one of the Renaissance palaces that line the Michelangelo-designed Capitoline Square.

And Willey, 84, can still recall the scene 60 years ago with diplomats sitting under majestic frescoes depicting the epic battle between two sets of triplet warriors.

“Everyone was dressed rather formally, in black suits. There was a lot of speech-making,” he said, chuckling at how in those days there was “very little security, very little bureaucracy.”

“I just came along and I saw the signing.”