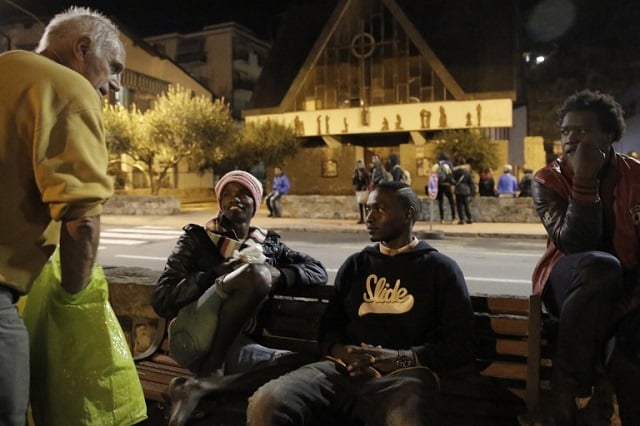 A French volunteer distributing food to migrants in Ventimiglia in 2016. Photo: Marco Bertorello/AFP

The three voluntary workers were charged with violating a city order.

“We were about ten people but they took the two drivers of the vehicles which had the food and Simon, a Briton who had forgotten his passport,” said one of them, Gerard Bonnet, 64.

“They took our fingerprints, a photo and released us,” he said.

Police in Ventimiglia, which has become a migrant bottleneck, told AFP the three had been arrested late on Monday for distributing food to the migrants, an offence which could lead to a fine of up 206 euros ($222). There is also a rarely used, three-month jail sentence available. Map showing the location of Ventimiglia, which lies close to the French-Italian border.

“This activity has been banned by a decree from the mayor of Ventimiglia,” police said.

The mayor instituted the ban on distributing food to migrants in the summer of 2015 when their arrivals, at first sporadic, began to block the train station, according to city hall.

It insisted that the mayor had taken that action for sanitary reasons.

“He didn't take the decision lightly. The unregulated distribution of food poses problems,” city officials who declined to be named told AFP.

They pointed out that migrants can find assistance at a Red Cross camp outside the town and also from the Catholic charity Caritas.

The arrested volunteers were with the Roya Citoyenne (citizen) rights group in the Roya valley on the French-Italian border.

On the night of the arrests the group distributed 160 food bags including, apples and cans of tuna as well as some clothing for the migrants.

Since 2015 Europe has seen its worst migration crisis since World War II with the arrival of hundreds of thousands of refugees and migrants fleeing war and poverty in the Middle East and Africa.

Ventimiglia has seen protests by migrants, many of whom hope to travel through France to northern Europe, where they may have friends and relatives or think they would have better job prospects.

There have also been clashes between police and activists, leading to the death of one police officer in August 2016.

The crisis has also seen several people arrested for people-smuggling between Italy and France, some claiming they were acting for humanitarian purposes and others charging migrants exorbitant fees.