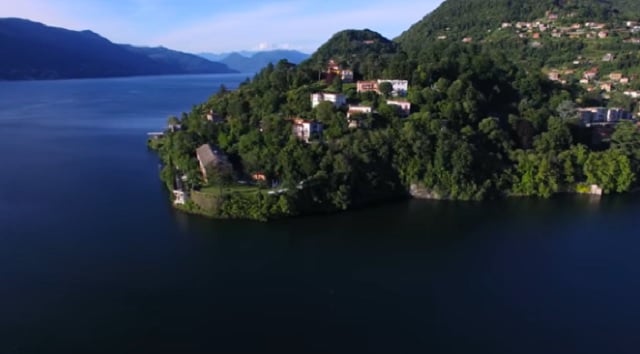 One of Italy's must-visit tourist hotspots, the string of coastal towns that make up the Cinque Terre are incredibly beautiful. But the hotspot has become so crowded as to provoke a backlash from local residents and authorities, who say the immense footfall is damaging the delicate paths and making their towns unliveable. Watching spectacular footage of the Ligurian coastline is an eco-friendly alternative…

The northern university town is a great choice for a culture and food-focused trip. Made up of red rooftops, endless porticoes and medieval towers, all surrounded by luscious green hills, it's a place that looks best from above.

READ MORE: Why Bologna should be the next place you visit in Italy

For the adventurous traveller, the Dolomite mountain range provides endless scope for hiking, skiing, swimming or cycling. But with this video, you don't have to climb to see the most spectacular birds-eye views.

Italy's second largest lake has long been popular with jetset celebrities, who can't get enough of the lavish villas or taking their yacht out on the clear blue water. If you don't quite have the budget to mimic their vacation, watch this video and pretend you're there…

The wine region is among the best known and most beautiful in the world, with the famous rolling Tuscan hills, cute little villages and old stone farmhouses. In addition to the wine and landscape, the region has a lot to offer for history fans, from Etruscan tombs to medieval battlegrounds.

Genoa is something of an underrated city in Italy, but this video should be enough to convince you it deserves a spot on your bucket list. The Ligurian port city is known as 'la Superba' in a nod to its impressive landmarks, from the stunningly ornate palazzi to the colourful boats on the coastline.

One of the most popular tourist destinations in the country, it's not hard to understand the appeal of the ancient city. The well-preserved ruins reveal plenty about life in ancient Rome, allowing visitors to explore the homes, shops, baths, amphitheatre and even the brothel.

Palermo has been named Italy's Capital of Culture next year, so it's perfect timing to discover the Sicilian city. What makes it unique is the mingling of different nations and cultures, from the Greeks to the Romans to the Normans and more, all of which have left their mark on the bustling city.

The volcanic island has long been hidden in the shadow of its glam neighbour, Capri, but is experiencing a rival thanks to the novels of Elena Ferrante. Ferrante's protagonist Lenu spends a summer on the island, and if you follow in her footsteps you'll be rewarded with idyll beaches, beautiful hills for hiking, and of course the charming seafront.

Italy's first-ever capital city boasts impressive architecture, leafy parks, and grand piazzas, with an impressive Alpine backdrop. Get a glimpse of the sights the city has to offer in this short video.

The famous cathedral, picture-perfect Ponte Vecchio. and dreamy piazzas easily make Florence a favourite for visitors to Italy. With the city centre famously hot and overcrowded in summer, soaring over the rooftops with this video is a good alternative.

Sardinia's capital boasts peaceful beaches and historic sites that date back to the Neolithic era.

One of the most ancient inhabited cities in the world, Matera is unlike anywhere else. The views over the gravina, a ravine atop which the old stone houses were built, are awe-inspiring and it feels like time has stood still among the sassi – cave homes carved into the rocks which have been used as homes for centuries, and are sometimes still inhabited today.

A version of this article was published in 2018.