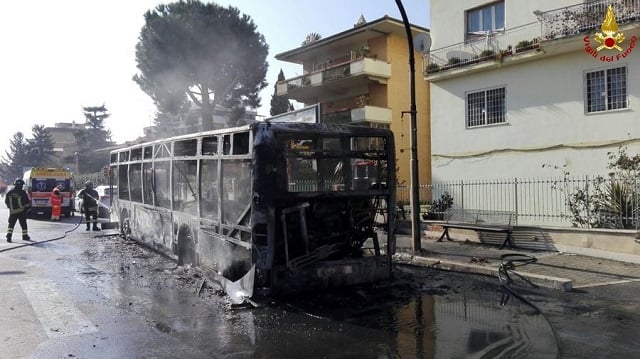 The above pictures shows a bus which was completely destroyed by fire last week at Ciampino, Rome. Photo: Vigili del Fuoco

Bus fires have become such a common occurrence that local residents have begun keeping track of them using the hashtag '#Flambus' – a reference to Trambus, the former name of the city's public transport authority Atac.

No one was injured in Monday's fire as the driver and two passengers on board were able to exit the vehicle.

However, the flames destroyed the rear section of the bus, and the blaze has sparked fresh calls for better maintenance of the Eternal City's eternally troubled public transport system.

Rome's transport woes have been well-documented, from regular delays and overcrowding to more extreme issues including ceiling collapses at Metro stations and train doors failing to close. The chaos is exacerbated by regular strike action in the transport sector.

Just five days before Monday's incident, a bus in the Ciampino suburb of the city was completely destroyed by fire. Again, the driver was able to help all passengers off the vehicle in time, but a set of traffic lights was also damaged.

The other two bus fires this March took place at the central Termini station and in the Castel Giubileo area to the north of the city centre.

Atac has opened an internal investigation into the series of fires, but the president of consumer rights group Codacons said this measure was insufficient.

“An internal inquiry is not enough. The public prosecutors' office should open an investigation into the maintenance of public transport,” said Carlo Rienzi of Codacons.

Members of the Faisa-Confail union have announced a 24-hour strike for April 24th in order to call for better maintenance of the city's buses and guarantee the safety of drivers and passengers.

In a statement, the union said the buses continued to catch fire “due to lack of maintenance and because half of the buses are over 15 years old”.

In fact, a study in November revealed that Rome's troubled transport system would take 80 years at the current rate to catch up with the average standard for European capitals.

The average bus had been in service for 13 years, and some for more than 30. That's almost double the Europe-wide average of just seven years.

Meanwhile, Roman trams are even more aged, according to environmental organization Legambiente. Every single one of the capital's trams has been in use for over 15 years, with an average age of 22.