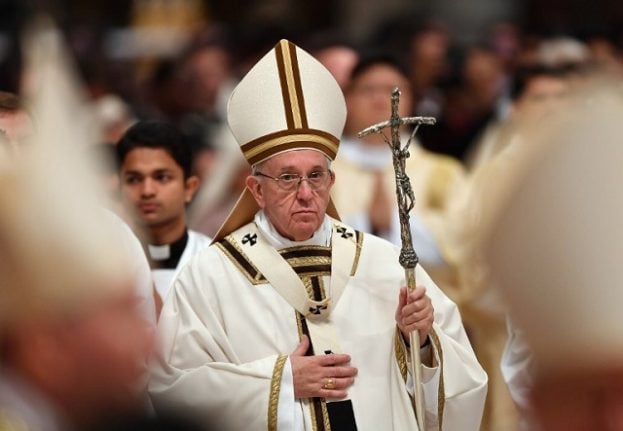 The closed-door visit to Paliano prison outside Rome will see the 80-year-old pontiff kneel before a small group of inmates, pouring water over their feet, drying them with a towel and bending to kiss them in an age-old Easter tradition.

The inmates include some 50 former mafiosi who made a deal to provide anti-mafia prosecutors with information in exchange for shorter prison sentence, the chaplain prison said.

“Everyone has the right to make a mistake. We have all been mistaken in one way or another,” Francis said in reference to prisoners in an interview published on Thursday in the Repubblica daily ahead of the ceremony.

The Argentine went on to lament “the little trust placed in rehabilitation, in reintegration into society”.

In Christian tradition Jesus is said to have washed their feet ahead of the meal in a gesture of humility.

In 2014 Francis excommunicated members of the mafia, which he called “the adoration of evil and contempt for common good”.

Thursday's ceremony is part of the run-up to Easter Sunday.

Since his election in 2013, the pope has moved the feet washing ceremony outside the walls of the Vatican and into centres for vulnerable people or those on society's margins.

In his first year he visited a youth detention centre where he performed the ritual on a group of young inmates including two Muslims – the first Catholic leader ever to do so.

In 2014 he washed the feet of elderly and disabled people, in 2015 he did so in a prison and last year he chose a migrant reception centre.